A Syrian national has been arrested near the German city of Dortmund, accused of war crimes in his home country. Ibrahim Al F. is accused of leading a militia guilty of looting and torture. 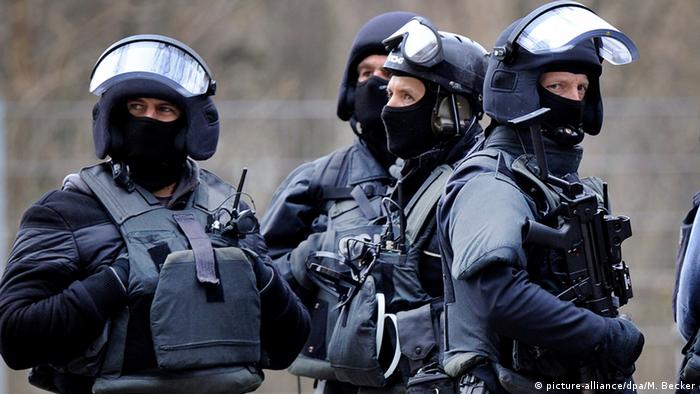 The man, identified only as Ibrahim Al F., was arrested by members of an armed police squad in the Westphalia region, after an arrest warrant was issued by Germany's Federal Court of Justice.

The UN's envoy has met with the Russian foreign minister to discuss the ongoing conflict with Syria. Despite tension, Sergei Lavrov said Moscow would fully support efforts to bring an end to the bloodshed. (05.04.2016)

A Syrian pilot has been captured by an affiliate of al Qaeda after ejecting from his plane. The group has been waging war against Assad's forces despite an ongoing ceasefire. (05.04.2016)

Syrian army 'retakes' al-Qaraytain near Palmyra from IS

Backed by Russian warplanes, Syrian forces have reportedly regained control of a strategic town near the historic city of Palmyra. The Syrian Observatory for Human Rights says fighting is still ongoing. (03.04.2016)

The 41-year-old is accused of leading a militia of more than 150 men in control of a district of the northern city of Aleppo in autumn 2012, after joining the fight against President Bashar al-Assad's forces earlier that year.

He was said to have tortured or overseen the torture of several people by his militiamen, according to officials. In addition, the group was said to have looted a neighboring part of the city that had been abandoned by withdrawing government troops.

While Al F.'s militia was said to be part of the Free Syrian Army (FSA) - in the Ghuraba al-Sham (Foreigners of the Levant) faction - it is alleged that its members primarily pursued selfish interests.

According to authorities, the accused repeatedly offered plundered art for sale. He was also said to have overseen the detention of two people who had tried to defend their neighborhood from the looting.

According to prosecutors, the pair were repeatedly tortured by militia in the presence of Al F., as well as by him personally. The pair were said to have later agreed to work for the militia, before being freed in return for a ransom.

Five other instances of torture and ransoming are also contained in the allegations.