German police arrested three Algerians suspected of ties to the "Islamic State" militant group and of having planned a terrorist attack in Berlin. Other suspects were questioned during police raids but not arrested. 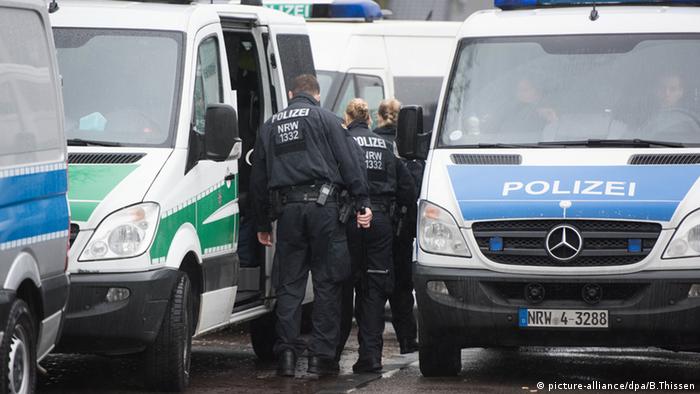 Suspects encountered during a number of police raids conducted in the early morning hours Thursday had allegedly been planning to meet in Berlin to carry out terrorist attacks. It is not known how close their plans were to completion, but German police said they believed all the suspects had active links to IS.

Martin Steltner, spokesman for the Berlin prosecutor's office, declined to comment on any further details from the ongoing police investigation but said that prosecutors were aware of a "concrete" plan to target the capital. The German newspaper "Bild" meanwhile claimed that the suspects had been plotting to attack Berlin's Alexanderplatz, a central shopping and entertainment square as well as a major regional transportation hub. Checkpoint Charlie, the former border crossing between East and West Berlin, was discussed as potential target, according to the German dpa news agency.

About 450 officers were deployed in Berlin during the operation, which occurred as parts of Germany started a week of celebrations marking Carnival amid beefed-up security measures. The raids came after a tipoff from Germany's domestic intelligence agency, the Federal Office for the Protection of the Constitution (BfV), regarding the prospect of a terrorist attack.

The coordinated police raids carried out on Thursday morning took place at four residences and two businesses in Berlin, a refugee shelter in the town of Attendorn in the state of North Rhine-Westphalia, a Hanover refugee shelter and a number of other locations in the city.

A 35-year-old Algerian man apprehended at the refugee shelter in Attendorn is believed to be the head of the terrorist cell. The man had allegedly entered the EU several months ago posing as a refugee. Algerian authorities confirmed they had a warrant for the man's arrest, accusing him of being a member of the Islamic State terrorist organization, while German authorities added that they had reason to believe the man had attended a militant training camp in Syria.

"Bild" reported that the suspect's wife and two infant children had also been taken into police custody. Police sources confirmed that a woman had also been detained during the raids, but said she had been arrested in Berlin, not Attendorn. It is unclear whether the woman arrested in Berlin is the wife of the Algerian national detained in Attendorn. 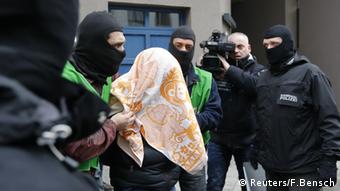 Meanwhile in Berlin, a 49-year-old suspect was also taken into custody. News reports said it was another Algerian national, who was held in custody for having counterfeit identity documents. Two of the four suspects had allegedly sought to pass themselves off as Syrian refugees.

Two further suspects, a 31-year-old in Berlin and a 26-year-old in Hanover, were also questioned during the raids but were not arrested. The police did not specify their reason for this, but explained that the younger of the two had been found to have links to an Islamist network in Belgium, adding that he had traveled at least once to the Brussels neighborhood of Molenbeek, where several perpetrators in November 13 terrorist attacks in Paris had lived or stayed.

Since the Paris attacks, in which IS gunmen and suicide bombers killed 130 people when they attacked a number of Paris nightspots, German authorities have issued high terror alerts on several occasions. The dpa news agency meanwhile said that investigators in the case had not managed to link the four suspects to a failed terrorist plot in Munich in December and a thwarted attack at a friendly football match in Hanover in November. The suspects had allegedly planned to attack Alexanderplatz, a busy transport hub in central Berlin

The alleged involvement of Algerian nationals in an IS plot is expected to put North African refugees in the spotlight once more, after they were blamed for a series of sexual assaults during New Year's Eve festivities in Cologne. German Chancellor Angela Merkel had announced recently that refugees from North Africa, including those coming from Algeria, would likely be deported as Germany classified Tunisia, Morocco and Algeria "safe" countries of origin.