German Pirate Party in uncharted waters | Germany | News and in-depth reporting from Berlin and beyond | DW | 13.05.2013

The German Pirate Party has attempted to rid itself of some dead weight at its convention. A new platform and more teamwork are supposed to help make the leap into the national parliament, despite low poll numbers. 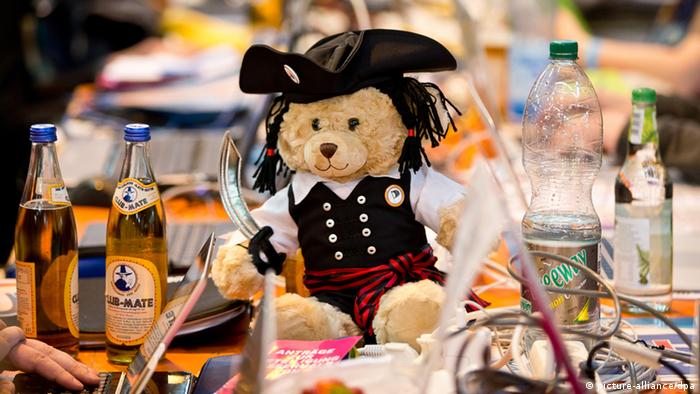 The past year has been tough for the Pirate Party, a political upstart in Germany - the party's popularity has sunk from 13 to 3 percent in polls. News coverage of the party has centered on inner quarrels, strange public behavior of party leaders, and a frenzy of mutual abuse on Twitter.

Initial hype for the party appears to have been followed by a hangover, both within the party and in public perception. A survey by opinion researcher Emnid found that four out of five Germans believe the party will not be able to gain 5 percent of the national vote - the amount necessary for party representatives to gain entry to the German parliament.

As the convention ended this Sunday evening (May 12) in Neumarkt, Bavaria, the party has sought a new beginning. The need to act decisively in order to make it into German parliament became a central theme. The party's new political director, Katharina Nocun, formulated this somewhat less formally: "The Pirates are going to have to work their butts off, looking forward wherever possible."

New girl on the block 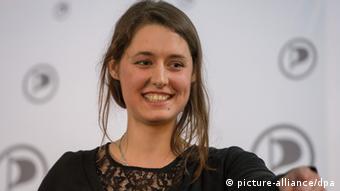 Katharina Nocun is the new face of the German Pirate Party

Nocun looks to be taking on the main work of this. The likable and eloquent 26-year-old of Polish heritage, who won 81 percent of the party vote, will represent the party to the media and the public. At her first press conference, Nocun skilfully parried the journalists' inquiries. Responding to accusations that the Pirates lack a unified platform, she described the party as a long-term project.

Conference participants hoped that the new face would bring those necessary percentage points for parliamentary participation. Having a woman head up the party has indeed worked out well in the past - Marina Weissband guided the party to its initial success in 2011 and 2012, bringing media resonance and sorting out internal party differences.

Fleshing out a platform

Personnel decisions were by no means the focus of the convention. In seeking to undo their image as a single-issue party, the Pirates developed an election manifesto with stances on topics such as labor, social policy, education, Europe and foreign policy. In short, they fleshed out a party platform, rudimentary as it may yet be.

The Pirates want to be a progressive party for the 21st century, with a focus on adapting society to a globalized and digital future. A major emphasis is citizen participation, not just in the sense of Internet communications, but also in social and educational arenas.

Throughout all, the German Pirates remained true to the party's leftist profile - which was reflected in its platform as well. They demand a state that takes care of every citizen. In terms of the Internet, they seek full freedom, including net neutrality, reform of intellectual property regulations and legalizing file-sharing. The party is also against policing of the web, including monitoring on the part of Internet service providers.

A couple of weeks ago, the Pirates had already introduced public representatives on various political topics. These individuals will act as media spokespeople and connect with citizens, clarifying for example how an unconditional basic income is supposed to work. The era in which the German Pirate Party answered questions without a clear perspective appears to be over. 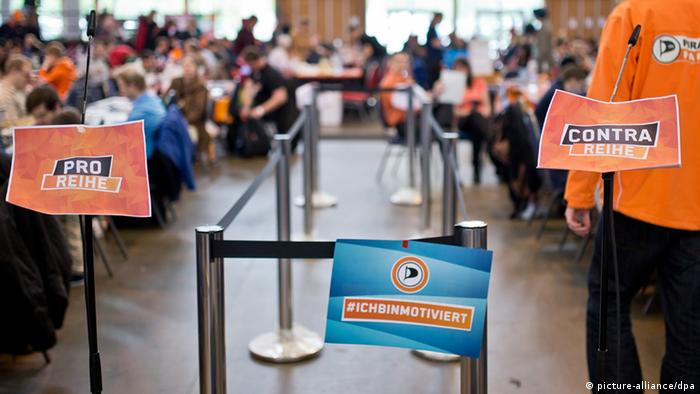 Topics were debated both online, and off

The technologically oriented party utilized new tools for forming and discussing opinions on hundreds of proposals. Liquid feedback functionality had previously been used on the party's internal website through a kind of Internet bulletin board. The results from here were condensed and then brought for a vote at the convention.

The liveliest and most passionate debate took place on a proposal for the so-called permanent general assembly, an online decision-making platform. Opponents of the proposal used all manner of tricks to prevent a vote after the concept had won a non-binding majority referendum. For the lay person, the details of this were barely comprehensible.

Proponents of the assembly model sought to solve the weaknesses of grassroots democracy, for example by allowing discussion and voting to occur regardless of time and place. That votes could also be delegated proved to be the proposal's weak point. Critics argued that it could allow the creation of "super delegates," since several layers of delegation would be possible.

After the first two days of the convention, the Pirates voted on the assembly proposal on the third and last day. Creation of the assembly as a permanent platform would have required a two-thirds majority vote in order to amend the fundamental party by-laws - which was not attained.

The Pirates continued their image of a group of men constantly tapping away on a laptop or mobile device. Yet there were more women and participants older than twenty-something. Many apparent students were also there. Among the older participants were even those from the leftist movements of the 1960s. 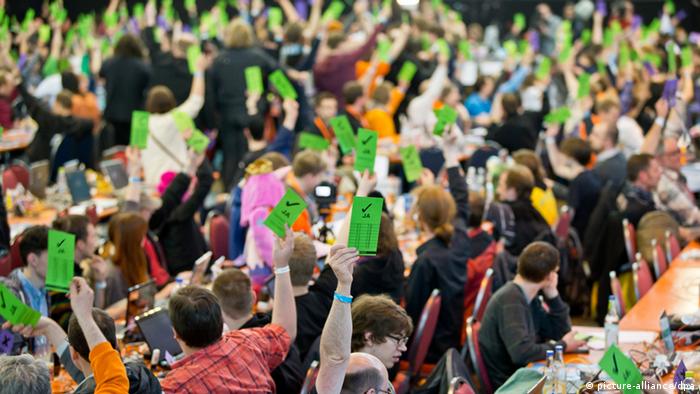 Voting took place in the flesh

The mood at the convention was in all more serious and industrious. There was also less flair than in the past, such as people wearing pirate costumes and holding impromptu performances. Organizers emphasized discipline, for example by strictly sticking to discussion time limits and punishing disturbances. Members not up on their dues were kept out.

Though right-wing elements had been present in the past, the convention succeeded in issuing a declaration opposing any coalition with the right-populist "Alternative for Germany."

Turnout was a bit lower than expected, at 1,300. But that figure represented less than half of participants, as 1,600 more took advantage of the online live stream. Those people just weren't able to submit virtual votes - yet.

Just a year ago, one in three Germans could envision voting for the Pirate Party. But in recent polls, support has since plunged. Still, top candidate Melanie Kalkowski believes she can win a seat in parliament. (10.05.2013)