Berlin's political class watched this weekend as the Alternative for Germany party was officially established. The newcomer group is highly critical of euro zone rescue measures and seeks to abolish the joint currency. 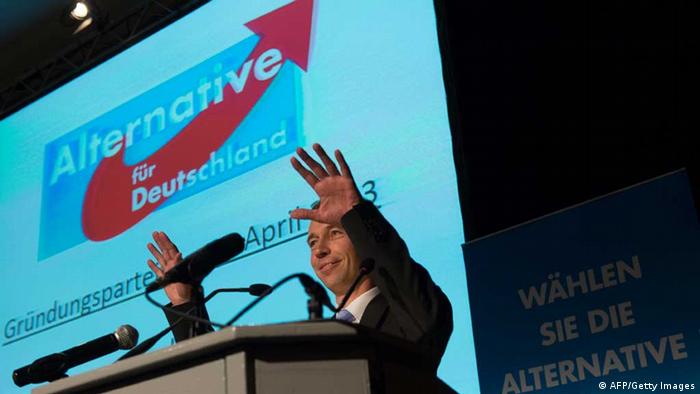 Bernd Lucke is tricky. After he had swept the 1,300 party conference attendees into a frenzy with his fiery speech, he offered them a deal: First the resolution, then a discussion about the party's platform - negotiations of the "small stuff" at the very end. He said the party must send a message to voters that Alternative for Germany (AfD) is entering the political arena with decisiveness and uniformity.

The audience agreed to his suggestion with near unanimity. "It's showtime!" shouted a few excited listeners.

Perhaps some AfD members in attendance had already read through the platform draft online, but, nevertheless, the party's base more or less blindly followed the proposal from Lucke, who added a few more requests just after the vote. When it comes to amendments to the platform, the party head said, it would help create the impression of resoluteness to include only those changes approved by a 75 percent majority. In contrast, proposals garnering only "weak majorities" could just be left aside.

Again, the audience agreed with Lucke's reasoning. As such, one could argue the party has agreed that minority opinions are unimportant. Lucke then asked rhetorically whether an extra vote (including a debate) is really necessary regarding whether the newly-founded party should participate in upcoming federal elections. The audience was invited to stand to cast its votes. In the end, only the numerous journalists on hand at the event seemed to feel comfortable remaining in their seats. 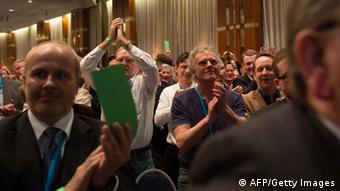 Calls of "Bravo!" and standing ovations came during Lucke's speech

More democracy, more referendums and transparency - those were among the demands in Lucke's speech, which leveled sharp criticism on Germany's established parties. But as he spoke at the party's founding convention, those principles fell to the wayside. Other issues - the party's public image and quick success - moved to the fore.

The Alternative for Germany party appeared on the scene in early February. The core of its platform is its criticism of the policies intended to save the euro and advanced by Angela Merkel as well as those Lucke dubs "Brussels bureaucrats." Several thousand citizens have joined the party in the last few weeks alone.

At the AfD's conference in a chic Berlin hotel, Germans of a rather conservative appearance and in all age groups were in attendance. In speeches, many attendees revealed they are former members of the parties in Germany's center-right governing coalition, the CSU/CDU and FDP. The AfD's 51-year-old party head is a trained economist who was a member of the CDU for 33 years. Women made up around five percent of those in attendance.

With prominent euro critics in Germany like Joachim Starbatty and Hans-Olaf Henkel as members, the anti-euro party has supporters known to broader German audiences thanks to their talk show appearances and books.

Since the euro crisis began, Germany has seen a number of efforts to turn the public's uncertainty about euro zone rescue policies into the political capital needed for a new party. Now, that time has come. Demographers say the AfD has the potential to secure 24 percent of voters, but that may mean little. At the high point of its popularity, the Pirate Party had also reached two-digit values and is now - after personnel and platform gaps went unfilled - well under the five percent hurdle required to gain seats in the German parliament.

But in contrast to the Pirates, the AfD has a charismatic leader, who is strategizing to maximize the group's success and who is capable of energizing the base. 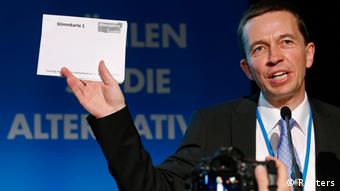 Neither 'left nor right'

The party is neither right- nor left-wing, Lucke said, but follows "healthy common sense." The AfD's head went on to say he hopes to draw in voters from all parties and "burst through the straitjacket of the worn-out old parties."

When it comes to the mood in Germany, Lucke believes that many people are immensely angry about the direction of euro zone politics. Given that backdrop, Lucke described the party's platform in general terms as follows: The AfD wants to avert further damage to Europe and Germany, viewing the introduction of the euro as a historic mistake. Germany must leave the currency because the current approach is a threat to peace in Europe as well as being far from legally or economically responsible. The European Stability Mechanism represents a "breach of law."

Lucke's speech also criticized European parliamentarians for purportedly becoming mere henchmen to national governments, who the AfD leader says are not serving the people who are suffering in Southern Europe, but rather, the interests of large-scale investors and hedge funds.

Lucke also impressed on his listeners a final aspect of the platform - namely that he does not view the AfD as a single-issue party. The economist offered a litany of issues that needed to be fixed in German society, including what he described as high energy costs due to consumers having to subsidize renewable energy projects, a tax system both unjust and too complicated, and the lack of a solution to Germany's low birth rate and demographic problems.

One approach to the declining population not favored by Lucke is supporting the immigration of unskilled foreign workers to Germany. In his words, such individuals are not prepared for the demands of a modern society, like Germany's, and would be better served not to come merely to be disappointed when unable to find work.

But Lucke would prefer to leave the domestic problems aside during the campaign and focus on the topic of Europe and the euro, where he sees the other parties as having political vulnerabilities. That stance represents another way in which a strategic goal - entry into parliament - trumps other issues for the party. However, even in its core platform area of euro zone policy, the AfD has not reached agreement on specifics. Should it campaign on a re-introduction of Germany's former currency, the deutschmark, or should it seek a smaller currency union within Europe? It is unclear whether voter referendums, as proposed by Lucke, would be able to resolve the question.