German Peacekeepers Suggested for Gaza | Germany | News and in-depth reporting from Berlin and beyond | DW | 07.01.2009

Germany welcomed a proposal by Egypt's President Hosny Mubarak for a ceasefire between Israel and Hamas in the Gaza Strip, and supporters of Chancellor Angela Merkel suggested German peacekeepers be sent to Gaza. 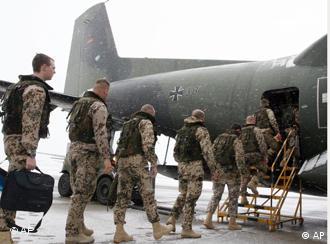 "If the parties to the conflict were to desire it, German soldiers could of course play a role," said Gert Weisskirchen, a Social Democratic spokesman on foreign policy in remarks to the Spiegel Online news website.

He called for Germany to voice from the very beginning a "willingness" to send troops under a UN Security Council resolution.

His SPD party is part of Merkel's ruling coalition.

Eckart von Klaeden, a foreign policy spokesman in Merkel's own Christian Democratic Union (CDU), said the use of German troops was feasible but they must have "robust" powers.

However Merkel's spokesman, Ulrich Wilhelm, said in Berlin the discussion about sending German troops in blue UN helmets was premature, since there had been no ceasefire between the Israelis and Hamas in Gaza.

Jens Ploetner, the Foreign Ministry spokesman, said: "It's an issue, if at all, about the third stage from here. Yet we haven't even got to the first stage," he said, referring to a ceasefire.

Germany has worked for six decades to make amends for the Holocaust and is supportive towards Israel.

It has provided warships since 2006 under a UN Security Council resolution to block weapons smuggling by Islamists of Hezbollah along Lebanon's coast.

Welcoming the Mubarak plan, Foreign Minister Frank-Walter Steinmeier said in a statement, "One must now seek an exit from the violence as soon as possible on this basis."

He also welcomed Israel's announcement that it would allow a humanitarian corridor for aid to enter the Gaza Strip.

Steinmeier called for the corridor to opened quickly "to get urgently needed supplies of relief to the suffering people in Gaza."

The minister said in Berlin that Germany was granting 2 million euros ($2.8 million) to the International Committee of the Red Cross (ICRC) for relief in Gaza.

He said the foreign ministry had budgeted aid to the Palestinians for the whole year of 11 million euros.

The European Union must put all hopes of building a closer relationship with Israel on hold until the fighting in the Gaza Strip ends, a group of leading aid agencies said Wednesday, Jan. 7. (07.01.2009)

Israel resumed bombing in the Gaza Strip after a three hour lull on Wednesday, January 7 as Israeli officials defer a decision to mount the third and final thrust of its mission to destroy Hamas' military capabilities. (07.01.2009)