Israel to Send Official to Cairo to Discuss Gaza Ceasefire | Europe| News and current affairs from around the continent | DW | 07.01.2009

Israel will send a top official to Cairo to discuss the details of a French-Egyptian proposal for a ceasefire in the Gaza Strip, local media reported Wednesday. 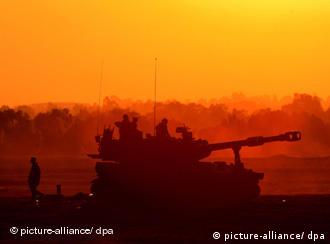 The plan calls for a cessation of violence, allowing aid to reach civilians, along with a call for the Israelis and Palestinians to take steps to make sure another conflict does not erupt. It also includes an invitation to discuss ending Israel's blockade on Gaza.

Mark Regev, an Israeli spokesman, said Israel wanted a "sustainable solution" that would include an end to Palestinian rocket fire and a mechanism to prevent the rearming of Hamas after a ceasefire.

Israeli officials said the talks in Cairo, to be attended by Amos Gilad, a senior defense figure, would include discussions on the borders but the Prime Minister's Office in Jerusalem had no comment on the report.

Egypt had brokered a six-month ceasefire, which started to break down in early November and officially ended on 19 December. On 27 December Israel launched Operation Cast Lead, which so far has caused over 700 Palestinian deaths. Nine Israelis, including six soldiers, have died. 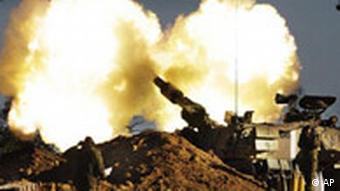 Israel resumed its assault on Gaza City after a pause

Israel resumed bombing in the Gaza Strip after a three hour lull on Wednesday as Israeli officials defer a decision to mount the third and final thrust of its mission to destroy Hamas' military capabilities.

Two Palestinians were killed on in an Israeli strike as the army resumed bombings in Gaza City after the three-hour lull, witnesses said.

The strike hit the eastern Gaza City neighbourhood of Zeitun, they said. The identity of the victims was not immediately available.

The Israeli army on Wednesday halted bombings around Gaza City for three hours in what the government called a "humanitarian respite."

At the same time, a decision on whether to order its armed forces to storm the Gaza Strip's urban centres was deferred, an Israeli official said.

The week-long air assault which began at the end of 2008 has since escalated into a ground invasion with Israeli troops and tanks invading the coastal enclave on Saturday, clashing with Palestinian guerrillas but not advancing beyond the outskirts of the city of Gaza or other densely populated areas.

Israel called the initial ground sweep the "second stage" of an operation to counter cross-border Palestinian rocket salvoes, without giving details on what might follow.

Prime Minister Ehud Olmert's security cabinet, convening on Wednesday, discussed the third -- and final -- stage of the offensive but deferred voting on the plan to an undisclosed date.

"The plan is to enter the urban centres," one official, who declined to be named, said before the deliberations.

Asked about the deferral, a senior Israeli defence official said: "We are pursuing parallel military and diplomatic tracks, so this is no simple matter."

The efforts of French President Nicolas Sarkozy and Egypt's Hosni Mubarak led to the three-hour lull to establish a humantirain corridor to be opened into Gaza. But as Israel retsarted operations, the two leaders continued to work towards a lasting peace. 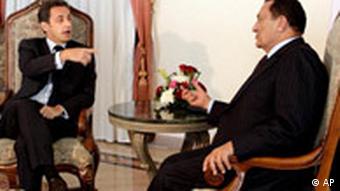 Sarkozy and Mubarak brokered the lull but want a longer peace

Under the peace plan, talks between Israeli and Hamas officials would be mediated by Cairo and address overall security on the Egypt-Gaza border, the Egyptian president said after talks with Sarkozy at the Red Sea resort of Sharm el-Sheikh.

Egypt "invites the Israelis and Palestinians for an urgent meeting to reach arrangements and guarantees that would not allow the repeat of the current escalation," Mubarak said.

Such guarantees would include "securing the borders and ... opening of the border crossings and lifting the siege," he said.

More than 600 Palestinians, including more than 200 children, have died in the offensive, which Israel insists is targeted against the Hamas leadership. That's in contrast to only a small handful of Israeli casualties. 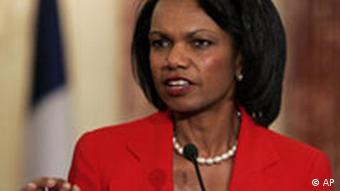 The US has given tacit support to the plan, with Secretary of State Condoleezza Rice labeling it a step in the right direction towards guaranteeing a more lasting peace.

"We are pleased by and wish to commend the statement of the president of Egypt and to follow up on that initiative," Rice told the United Nations Security Council on Tuesday at a session aimed at debating the Israeli offensive.

"We need urgently to conclude a ceasefire that can endure and that can bring real security."

The outgoing Bush administration has called for an end to Hamas rocket attacks on parts of Israel, an opening of border crossings into Gaza and an end to arms smuggling into the territory through the estimated 300 tunnels running from Egypt.

The tunnels, which Israel has said must be closed for peace to occur, are at the center of international talks aimed at ending the Israeli offensive on Gaza.

"There is a focus in the short term on what we can do to make sure that the smuggling of rockets and finance does not continue into Gaza," said former British Prime Minister Tony Blair, who is now envoy for the Middle East Quartet of the US, Russia, the EU and UN.

The US on Tuesday turned its back on a Libyan-proposed resolution backed by several Arab states. Israel has also shunned the Libyan draft. 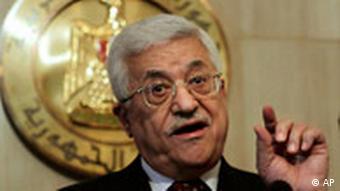 Palestinian President Mahmoud Abbas of the anti-Hamas party Fatah urged further backing for the Sarkozy-Mubarak plan to stop the killing of innocent civilians by the Israeli air, land and sea offensive.

"Do not let one more Palestinian mother cry for her children, do not allow it, put an end to the massacre of my people, let my people live, and let my people be free," he said.

Israeli Ambassador to the UN Gabriela Shalev said the peace plan would be taken into serious consideration by the Jewish state.

"We respect every effort being made to find a solution," Shalev told reporters. "I am very sure it will be considered ... we take it very, very seriously."

There was no immediate reaction to the Egyptian-French plan from the office of Israeli Prime Minister Ehud Olmert. 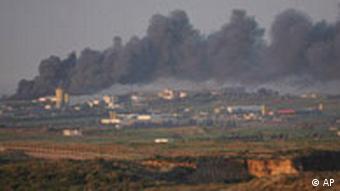 The offensive began on Dec. 27

The Security Council was to continue Wednesday its lengthy debate of the Israeli offensive, with the Libyan and Egyptian-French proposals hanging in the balance.

The Libyan draft calls for a lifting of an 18-month Israeli blockade on Gaza, the opening of border crossings, "an immediate and permanent ceasefire in the Gaza Strip and the immediate withdrawal of Israeli forces to positions held prior to Dec. 27, 2008."

But French Foreign Minister Bernard Kouchner said the focus should now be on the Egyptian and French peace plan.

"The Security Council must back and encourage these promising efforts," Kouchner said. "All regional states must support this movement and seek to foster moderation and restraint."

With recent hostilities nearing two weeks, the Council has come under increased scrutiny for inaction.

"It is the responsibility of the Council to end conflicts as soon as possible, and the current conflict in Gaza should be no exception," Saudi Foreign Minister Prince Saud Al-Faisal said Tuesday.

"The Council has not yet taken concrete action. This raises questions about its credibility and the whole system of international peace and security," he added.

The European Union must put all hopes of building a closer relationship with Israel on hold until the fighting in the Gaza Strip ends, a group of leading aid agencies said Wednesday, Jan. 7. (07.01.2009)

An Israeli strike on a UN school killed at least 46 Palestinian civilians Tuesday, in the deadliest single incident since Israel launched its Gaza offensive, and one which is likely to increase pressure over a ceasefire. (06.01.2009)

As the international community says that Israel's image is suffering, Red Cross officials called the last 24 hours the most terrifying night yet of violence in Gaza. (06.01.2009)