A group of prominent German MPs have listed a set of requirements to legalize assisted suicide in the country. A German court also ruled in favor of a coma patient's decision to forgo life-support treatment. 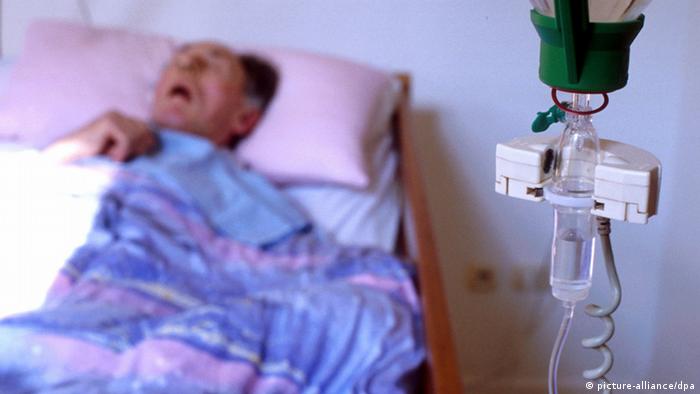 Politicians of the Bundestag are rallying to organize support for physician-assisted suicide for patients who are in terminally ill and seek a means to end their suffering. The group said they considered it to be a "breach of human dignity" when laws to protect human life "caused suffering."

A human being who has acute pain "should be able to decide how much pain he can bear," Hintze said while presenting a paper on assisted suicide in the German parliament on Thursday. This decision should be taken in an atmosphere of trust between the patient and his doctor, and doctors should be allowed to assist, on a voluntary basis, Hintze added.

The MPs listed seven preconditions for suicide assisted by a doctor. The first condition requires that the patient be an adult and have the ability to think rationally. He or she has to be suffering from an incurable disease which will inevitably lead to death.

The parliamentary paper also stressed that the regulations for physician-assisted death were not to be included in the criminal law but were to be a part of civil law. This way the relationship of trust between the doctor and patient would not be undermined.

Meanwhile, the German Federal Court of Justice ruled that assisting a coma patient with death was possible even if the patient had not left any instructions on the matter. In such a case, a special supervisory court would decide on releasing the coma patient from his or her life-supporting systems.

The court was passing its verdict on a woman who had suffered a hemorrhage in 2009 and has been living in a coma since then. Her husband and her daughter, who are listed as her caretakers, approached the court to allow them to take her off life support. They claimed she had told them her desire to be taken off life support in case she went into a comatose state.

The German court also said in its decision that the earlier wishes of the patient in this regard were to be taken into consideration. These could also include "all statements of the affected person, which specified concrete life and treatment situations, but which did not satisfy the requirements for a will by the patient."

Opposition to the proposed changes

Germany does not have any law which specifically regulates euthanasia for the terminally ill. In this context, the German Federal Court's ruling is being considered a milestone for families with relatives who have been in a coma for a long time and German parliamentarians hope for a similar breakthrough in euthanasia legislation.

Matthias Kopp, spokesperson for the German Bishop's Conference, has categorically rejected physician-assisted suicide, saying that it "would pressurize people in borderline situations."

The group of MPs also called for a ban of controversial euthanasia organizations in Germany. The German parliament will debate legislative action on physician-assisted suicide on November 13. A decision on this issue is likely to be taken next year.

An court in Belgium has upheld convicted murderer and rapist Frank Van Den Bleeken's approval to be euthanized. He will be the first detainee in the country to be granted the right to euthanasia for psychiatric reasons. (29.09.2014)

The Belgian parliament has voted to allow children access to assisted suicide. Despite strong opposition from religious organizations and some doctors, the legislation had enjoyed widespread popular support. (13.02.2014)