Germany's parliament has agreed to boost the country's troop presence in Mali. The Bundestag also decided to extend the German military's operation in Afghanistan for one last time. 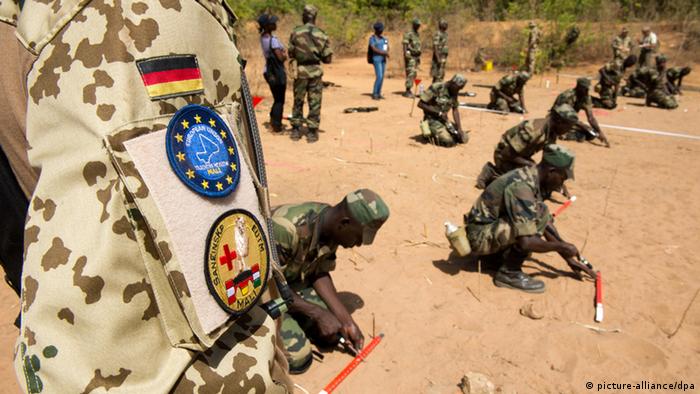 The Bundestag on Thursday decided that Germany's troop contingent in Mali, which is part of the joint European Union Training Mission Mali (EUTM), should be increased by 70 to 250 soldiers.

Along with extending the Afghanistan mission, the troop boost in the north African country was met with overwhelming support in the Bundestag. Some 526 parliamentarians voted in favor of the move, with 61 against. The opposition to the increase came from the Bundestag's Left Party faction.

The next contingent of Bundeswehr troops in Mali is to join the joint German-French military brigade in the country. Chancellor Angela Merkel and French President Francois Hollande announced the Franco-German operation in Mali during a recent meeting in Paris.

Mali was plunged into crisis in March 2012 when the government was overthrown in a military coup. Tuareg rebels and later Islamist fighters used the ensuing security vacuum to seize control the country's north. Major fighting ended in January 2013 after France, Mali's former colonial ruler, intervened with a military operation. The security situation in the north of the country remains unstable, however.

According to the defense ministry, there are 104 German troops currently in Mali. Their primary task is training and educating local government soldiers, as well as advising Malian leaders and defense ministry officials. The Bundeswehr also provides medics.

The Bundestag also agreed to extend Germany's participation in the NATO-led International Security Assistance Force (ISAF) mission in Afghanistan. So far, Germany's troop presence in the country has been reduced from 4,400 to around 3,000. As many as 800 German soldiers are to operate in the country by providing training support after the withdraw of combat troops at the end 2014.

Speakers for Germany's ruling parliamentary coalition told the Bundestag Friday that the country's military presence needed to be extended because the ISAF mission's goals had yet to be achieved.

"The entire picture of Afghanistan remains controversial and contradictory," said Social Democrats lawmaker Ralf Mützenich. He added that while on the one hand there is violence, corruption and a growing drug trade, there are also basic needs like water, medicine and education that need to be filled.

Christian Democrat parliamentarian Peter Beyer said that, despite the problems in Afghanistan, ceasing support entirely for the ISAF mission would send the wrong signal.

The ISAF mission is supposed to phase out its combat component starting in 2015 and focus solely on training and support. A successful transition away from a combat role hinges on the successful agreement of a US security deal with the Afghanistan government.