German Neo-Nazis Fail in Fight to March for Hitler′s Deputy | Germany | News and in-depth reporting from Berlin and beyond | DW | 17.08.2007

German neo-Nazis on Thursday lost court fights after seeking permission to stage marches in memory of Hitler's deputy, Rudolf Hess, who died 20 years ago on Aug. 17. 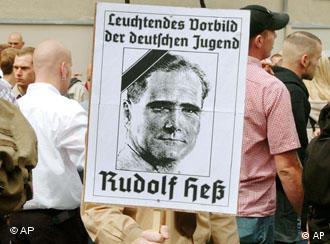 "A shining role model for German youth," reads the poster

An Munich court on Friday upheld a ban imposed by city officials in Munich on a planned march in honor of Hess at central St. Mary's Square, or Marienplatz.

At nearby Charles Square, or Karlsplatz, neo-Nazis had been given the go-ahead to demonstrate against Germany's law against incitement of the people, which carries prison time or fines for publicly glorifying or justifying the Nazi terror regime.

"We don't want to prevent this event," the head of Munich's department of public order, Wilfried Blume-Bayerle, told DW-WORLD.DE, adding that city officials didn't want to curtail the demonstrators' right to freedom of expression.

"We just have to make sure that it doesn't turn into a masked Hess memorial," he said.

In the eastern German town of Jena in the state of Thuringia, officials meanwhile failed to ban a demonstration on Saturday after a court ruled that no convincing proof existed that the NPD planned to honor Hess rather than demonstrate against the law against incitement of the people.

The eastern German state of Saxony-Anhalt has issued a complete ban on gatherings for right-wing extremists. 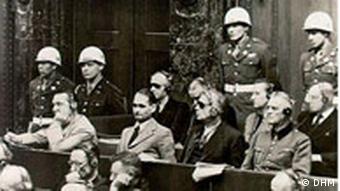 Hess (second from left) as a defendant in Nuremberg

Hess, who became a prisoner of war in Britain in 1941, was sentenced to life imprisonment for planning a war of aggression in the Nuremberg trials. In total, he spent 46 years in prison after repeated pleas for clemency were rejected.

The Berlin prison where he died on Aug. 17, 1987, was torn down to prevent it from becoming a pilgrimage site for neo-Nazis. He is buried in Wunsiedel in northern Bavaria, where memorial marches took place on the anniversary of his death until a German law prohibited them in 2005.

NPD leader Udo Voigt meanwhile told Berlin's Der Tagesspiegel newspaper that his party was going to set up "mobile offices" in cars after the organization was unable to find a landlord willing to rent them space for fear of attacks.

"They'll need good garages," an anonymous official for Berlin's domestic intelligence service told the newspaper, adding that the high number of left-wing radicals in the capital made the vehicles likely targets for attacks.

To mark Wednesday as the International Day for the Elimination of Racism, an alliance in eastern Germany is trying to fight the rise of right-wing extremism and neo-Nazi violence, particularly when it targets foreigners. (21.03.2007)

Neo-Nazis and counter-demonstrators took to the streets across Germany over the weekend, but the Bavarian town of Wunsiedel kept both groups out of town with a "day of democracy." (21.08.2006)

Germany's lower house of parliament Friday voted by a large majority to tighten the right of assembly, thus making it easier in future to ban neo-Nazi demonstrations at historic landmarks. (11.03.2005)