German Muslims unite against ′Islamic State′ | Germany | News and in-depth reporting from Berlin and beyond | DW | 19.09.2014

All across Germany, Muslims have used their Friday prayers to protest against injustice and hate crimes. In Berlin, the organizers did their best to demonstrate a united front against the "Islamic State." 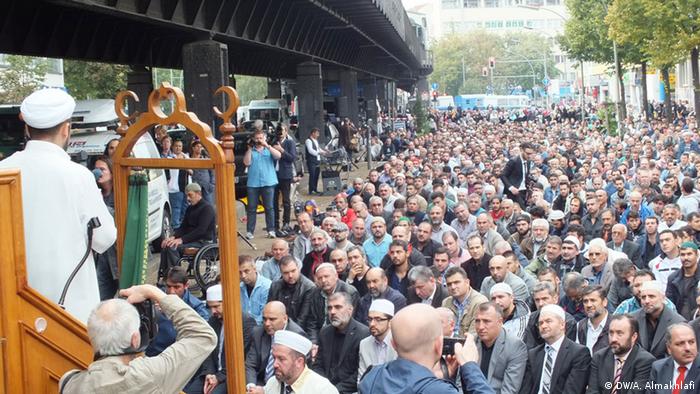 The old man's slurred question is barely intelligible: Why, he mutters angrily, would he support Muslims? He drops the flyer he was clutching in his hand, then totters off along the busy road. For a second, the young man in the neat black suit stares at the crumpled picture of a white mosque now lying on the dirty pavement. Then he shrugs, turning to two young women in headscarves wandering arm in arm past the small kebab shop and travel agency advertising flights to Istanbul and Anatolia: Would they like to join a rally against injustice and hatred? He proffers a flyer and gestures to the other side of the road, which has been blocked off by several police vans.

It's just past midday and several men are laying out a black tarpaulin outside a small mosque in what is normally a busy road in Berlin's ethnically-mixed Kreuzberg district. They're preparing for the Friday prayer and subsequent rally: All across Germany, in some 2,000 mosques, Muslim communities are marking a day of action against hate and injustice.

The aim is two-fold: to denounce the atrocities committed in the name of their faith by the militants of the self-proclaimed "Islamic State", also known as ISIS or IS - and to protest against what they describe as growing "Islamophobia" in Germany.

A friend told her about the rally, Fatima Sevik says: "And I immediately knew I had to join her." She's a petite woman with a white headscarf and an open, warm smile. But when she talks about the IS fighters her smile turns into a frown. "They're murderers, who have nothing, absolutely nothing to do with my religion." Her Islam, she says, is "full of love and understanding." Murder and any act of terrorism, she adds, "are just simply wrong." 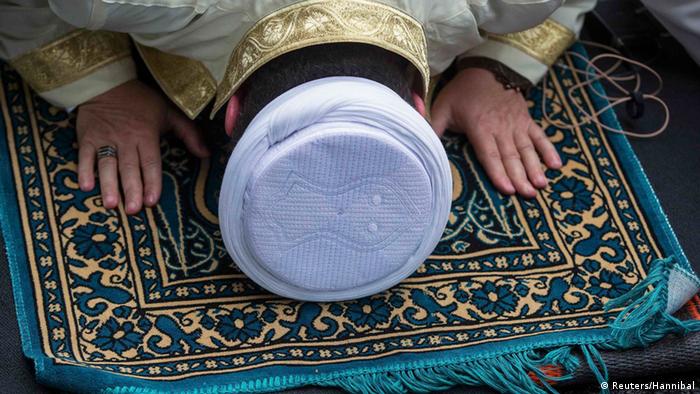 The rally was held in 2,000 mosques across Germany

She's shouting now, leaning forward to make herself heard as the imam's prayers boom out across the men who are sitting in rows on their prayer mats on the floor. "We need to show people that we don't agree with fanatics and extremists."

As ever more people file down the road, many carrying prayer mats, the organizers roll out more tarpaulin to cover the damp pavement. A young man in his mid-twenties is looking on, chatting with his friends. He's about to join the prayer, he says. He's here to demonstrate against "those people who hate us Muslims."

He dismisses the question of whether mosques should do more to prevent radicalization, given that according to official estimates some 400 German Muslims have joined the "Islamic State." He shakes his head, then angrily gestures to the mosque, which was badly damaged by a fire a couple of weeks ago. "That's extremism," he says. "They hate us, just because we're Muslims." Then he turns away to take a spot on the carpet.

Nikolaus Schneider's spokeswoman ushers him into a side-street, away from the booming loudspeakers and countless journalists, cameramen, and onlookers who are milling around, taking pictures and scribbling notes. Schneider, who heads the Council of Protestant Churches, says he is happy that the Muslim community has taken such a clear position against extremism.

He chooses his words carefully when asked to respond to accusations that it has taken Muslim leaders too long to do so. He points to the fact that there are many, sometimes competing, Muslim groups in Germany. "I can sympathize that these different groups have to pull together first." The important thing, he adds, is that they have taken such a strong stance. 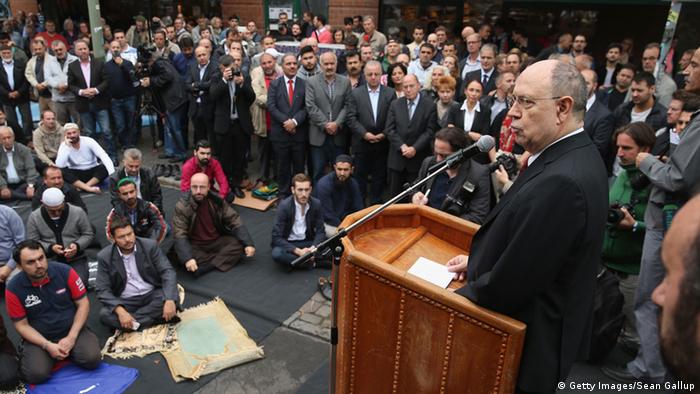 Nikolas Schneider: "We believe you"

A few minutes later he takes to the small wooden stage and thanks Muslim leaders for their condemnation of the terror of the "Islamic State." As a Turkish cameraman bends dangerously low over the parapet of a hydraulic lift positioned just behind the stage to get a better shot of Schneider, the audience claps as he calls out: "You have unequivocally said that Islam and terror don't belong together." And, he adds, "we believe you." The audience cheers.

A few meters away, Azize Tank, a member of parliament for the left-wing party Die Linke, is standing next to the local organic supermarket. Her long white curls fly around her head as she vehemently shakes her head: "Normal Muslims shouldn't always have to apologize for everything." After all, she adds, the atrocities committed in the name of their faith have nothing to do with them.

Rather than blaming Muslims in general for some of their members' radicalization, politicians should do more to make them feel welcome, she says. "You need to give young people jobs and make sure there's an environment that prevents them from joining extremist organizations."

A show of unity

Then she turns away to join the political VIPs who have made an appearance. She squeezes past one of the cameramen to position herself next to her party leader, Gregor Gysi, and Cem Özdemir of the Green party. A Catholic priest smiles on, as the press gathers round to take pictures as the politicians and church leaders solemnly shake hands with Bekir Alboga of the Coordinating Council of Muslims in Germany.

Once Alboga has read out the organization's joint declaration, condemning atrocities and murder committed in the name of Allah, but also what they described as an increase in anti-Muslim hate crimes in Germany - "we are concerned and anxious because of the growing hostilities" - they crowd onto the stage, to, as one organizer puts it, "demonstrate our united face for the journalists and cameras."

Then they position themselves in front of the cameras. Surrounded by a scrum of journalists, Özdemir calls for unity: "The extremists want to divide us into Christians, Muslims and Jews." Behind him, several men are slowly pushing the wooden pulpit back to the charred mosque. Özdemir raises his voice to make himself heard above the din: "We can't let them divide us." The next rally, he adds, should be jointly organized by Jewish, Muslim, and Christian leaders.

Behind him, Sezan Cakan, the imam, has taken off his white robes. At least 3,000 people showed up, he says, far more than he expected. He smiles broadly: "That's a really good sign."

The German Muslim community's protest against extremism and injustice was a strong appeal for tolerance. Non-Muslims should accept the proffered hand, says DW's Bettina Marx. (19.09.2014)

Muslim protest in Germany against jihadists

Two thousand mosques in Germany have been urged by Muslim leaders to use their Friday rituals to protest against injustice and hate. Their campaign aims to counter shock-image beheadings by terrorists in Syria and Iraq. (19.09.2014)

Canada: Suspect charged with terrorism over attack on Muslim family 14.06.2021