Environment minister Peter Altmaier has reacted to Germany's record floods by calling for rivers to be given more room to buffer their floodwaters, if necessary through removal of riverside homes and relocation of dikes. 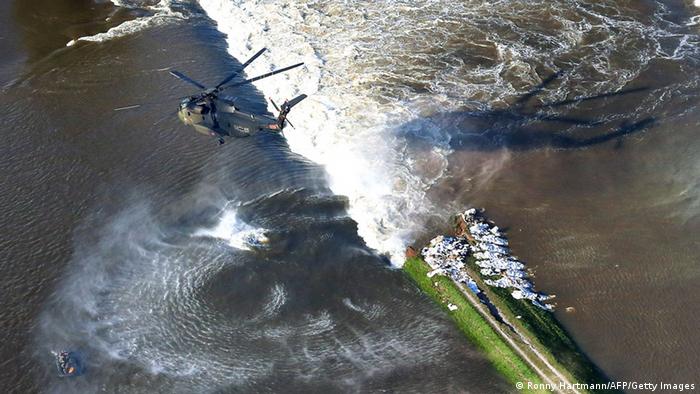 Germany record floods along the Elbe and Danube - just over a decade after its Elbe flood disaster in 2002 - were described by Environment Minister Peter Altmaier on Tuesday as "alarming" evidence that "extreme weather events" had become more frequent and required drastic hydrological remedies.

Dikes must be set back further from waterways, larger flood terraces must be designated, and, as a last recourse, expropriation of riverside homes and premises could not be excluded, said Altmaier.

"We must prepare ourselves and reckon that in the future there will be more similar extreme high-water situations," he said.

This, said Landsberg, should give priority to flood-protection measures over protests by conservationists or riverside residents who oppose unsightly structures.

"We must give up the idea that a "100-year flood" only happens once every 100 years," Landsberg said. Recovery work this time round would take up to three years and cost Germany at least 10 billion euros ($13.2 billion), he estimated.

Slow-moving Elbe floodwaters are moving north. As residents there prepare for the worst, southern German towns are beginning to clean up. DW looks at Germany's second "flood of the century" in recent memory. (11.06.2013)

Environment minister Altmaier said that, of 18 projects along the Elbe to set back dikes and create more floodwater space, only four had actually been realized, often because of objections by land owners.

Their remarks precede a meeting on Thursday between Chancellor Angela Merkel and the premiers of Germany's 16 regional states or Länder.

Train passengers face delays and route diversions because of an Elbe bridge closure enacted on Monday. Among those train links affected, according to Germany's rail operator Bundesbahn, are its long-distance services from Berlin via Hannover to Cologne and from Berlin to Frankfurt.

The gap has channeled floodwaters across a federal highway and towards other towns. Across the Stendal district, some 11,000 residents have been evacuated or warned to leave danger zones.

The water level in Magdeburg, the state's capital, upriver, had dropped half a meter on Tuesday since its peak on Sunday when a key electric substation needed for pumps was nearly inundated. The level on Tuesday was still 13 centimeters higher than the city's previous record in 2002.

Brandenburg's city of Wittenberge is bracing itself for a historic high of 8.2 meters. Its median level is 2.77 meters.

Further north at Dömitz, in Mecklenburg-West Pomerania state, the water is 40 centimeters above its highest recorded level, leaving residents alarmed that dikes could break.

At Hitzzacker and Schnackenburg, in Lower Saxony state, the Elbe is flowing at levels half-a-meter higher than any previous measurements, according to the state's environmental ministry in Hanover.

Germany's BDB inland waterway shipping federation says cargo traffic was halted days ago on the Elbe, the Main and the Danube. It could take up to 14 days for masses of fluvial shingle and floating flood debris such as tree stumps to be removed before waterways can be declared reopened, it said.

Russia has annexed large swathes of southern and eastern Ukraine, changing the lives of millions of people overnight. Will they accept the status quo, or resist?