A German farmer who lost both arms in an accident is able to raise his arms a year after a groundbreaking transplant operation. The 55-year-old patient hopes to get back on a tractor - and a motorcycle - soon. 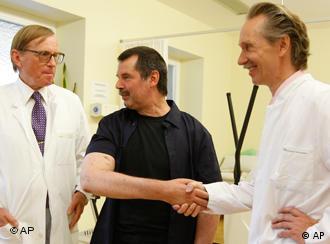 Doctors are impressed with the speed of Merk's recovery

After losing both of his arms when he fell into a harvester in 2002, Karl Merk underwent a 15-hour operation in Munich where a team of 40 surgeons attached a pair of donated arms.

Following many hours of physiotherapy, the 55-year-old Merk waved his arms and scratched his head with the support of braces or bandages at a press conference on Wednesday.

Asked if he was able to drink a glass of beer in typical Bavarian fashion, Merk said, "Well, yeah, at the moment I'm drinking from a straw otherwise it would be a bit dangerous but it should happen soon."

Doctors had originally thought it would take up to two years for his nerves to regrow enough for him to move them.

"The regeneration of the transplant is very gratifying," said Merk's specialist, Professor Hans-Gunther Machens, adding that he would like to establish a center for limb reconstruction with other clinics in the future.

Back to the farm 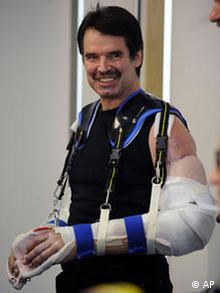 Merk is the only person to receive two arm transplants

Doctors said it could take another year until Merk gains complete control over the arms, and when that happens, the Bavarian said he hopes to return to farming.

For a number of years surgeons have been able to re-attach fingers, hands and partial arms, or to graft donated limbs on to a patient. Merk's case, however, is the first where two complete donor arms have been attached.

Merk, from Allgaeu in southern Germany, was given hope for new arms in July 2008, when the family of a recently deceased male who matched his age, skin color, size and blood group, agreed to donate the limbs that would replace the prosthetics he had used since the accident.

Surgeons then battled against time to attach the arms, only to find that the new limbs were slightly longer than Merk's had been. Doctors at the Munich University Clinic then whittled down the bone to fit.

"At the beginning, I didn't dare to believe it," Merk told reporters. "The first three or four weeks were hard, but I would do it again straightaway.

"When I manage to get back on to my motorcycle and ride, that's going to be great," he added.

The clinic said Merk's nerve cells then slowly grew back to connect with the donated arms, and that drugs he will have to take for the rest of his life helped him survive the "rejection phase," when his body could have had an adverse reaction to the new limbs.

"It is our intention today to show people, who may have a similar handicap ... what is possible in certain circumstances," said Christoph Hoehnke, the head of the transplant team. "Mr. Merk is much further along than we thought he would be ... he was a fantastic patient."

"A New Chance At Life": A look at organ donation in Germany

Organ failure often means death, especially when there is a shortage of organ donors. In Germany, over 4,000 transplants occur each year, but there are still too few organ donors when compared to those in need. (21.12.2008)

German doctors said Friday they had succeeded in performing the world's first transplant of two full arms on a farmer whose own limbs had been severed just below the shoulder in an accident six years ago. (01.08.2008)