Catholic Bishop Franz-Peter Tebartz-van Elst has paid a fine of 20,000 euros to end a case for lying under oath. The scandal surrounding the 'bling bishop' and his lavish lifestyle has rocked Germany's Catholic Church. 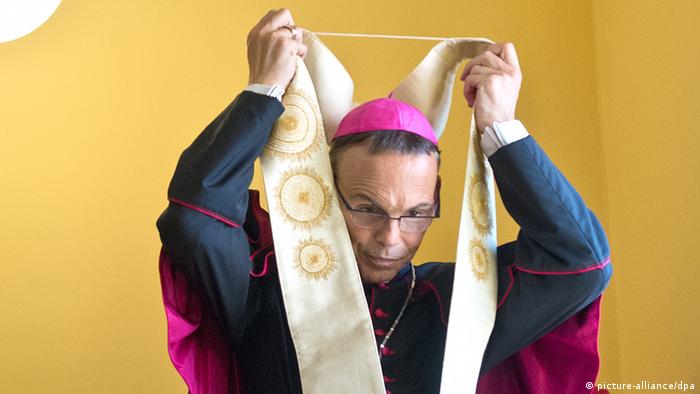 Bishop Franz-Peter Tebartz-van Elst of Limburg in the German state of Hesse was accused by Hamburg prosecutors of making false statements in a court case concerning a first-class flight he took to India.

The prosecutor had claimed that the 53-year-old bishop gave a false affadavit during court action against the German news weekly Der Spiegel, which, based on evidence from the airline in question, had reported that the clergyman flew first class to visit slum dwellers in India.

Speaking to a Spiegel reporter, the 53-year-old Tebartz-van Elst insisted that he had flown business class and then, in a statement under oath, denied having said those words, forcing the magazine to print a retraction. However, the reporter had videotaped the interview and the Hamburg court accepted this as evidence.

On Monday, the court announced that the state treasury had received the 20,000-euro payment ($27,000) and, with the consent of prosecutors, closed the case.

This is likely to take the spotlight off the clergyman, who was suspended by the pope last month in connection with a scandal surrounding the renovation of his residence - which includes a museum, conference halls, a chapel and private apartments - in the ancient town of Limburg in central Germany's state of Hesse.

In October, the Vatican announced that Tebartz-van Elst would go on sabbatical for an unspecified amount of time following revelations that he spent up to 40 million euros on the building project - eight times the amount that was originally planned. The end result included several features requested by the bishop himself, including a special bathtub with a price tag of 15,000 euros.

The bishop's extravagant use of church funds sparked protests among Catholics in Limburg and beyond, with adherents saying it went against the humble style that Pope Francis brought to the Vatican since his election in March, prompting calls for Tebartz-van Elst's resignation.

The bishop remained defiant and defended the costs, citing the breadth of the project as the main reason for the exorbitant bill.

Allegations over the possible misuse of money triggered an emotional discussion in Germany, where funds come not only from donations, but also from a special "church tax" paid by registered parishioners to their respective denominations.