Germany's Office for Information Security (BSI) has issued a warning against using Microsoft’s Internet Explorer (IE). The advisory follows cyber attacks against Google believed made possible by the IE weaknesses. 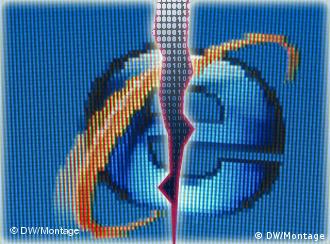 The BSI advises against using the Microsoft web browser

The German Office for Information Security (BSI) says Windows operating systems are at risk as a result of security gaps in Microsoft's Internet Explorer web browser.

The BSI says flaws in the program may have been the reason why hackers were recently able to conduct cyber attacks on search engine Google and other US companies.

"The weaknesses make it possible for cyber attackers to start and lock computers that have a Windows operating system," the BSI said in a statement on its Web site.

Google said on Tuesday that China-based cyber spies struck the Internet giant in an apparent bid to hack into the email accounts of human rights activists around the world, describing the attack as "highly sophisticated."

The BSI recommended against using versions 6, 7 and 8 of Internet Explorer on operating systems XP, Vista and Windows 7 until the programming faults had been corrected.

Microsoft said in a statement that damage caused by the security gaps had been limited and that it was working on a series of patches to fix the problem.

Google has been praised for refusing to keep facilitating censorship of its Chinese services. But its faceoff with Chinese authorities continues, as EU officials express concern and China defends its position. (14.01.2010)