German gymnastics coach Gabriele Frehse should be fired from her role at an Olympic training center, according to the German Gymnastics Federation. An investigation concludes that Frehse used "psychological violence." 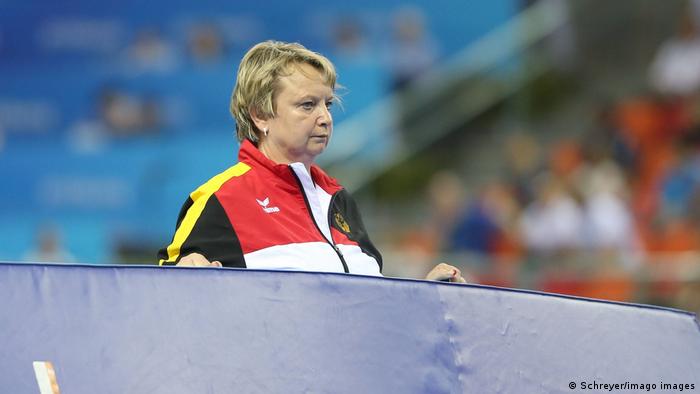 The German Gymnastics Federation (DTB) has announced the findings of its independent investigation into allegations of abuse in the sport, admitting that previous action it took was "not sufficient" and demanding that the coach Gabriele Frehse be fired from her role at the Olympic training center in Chemnitz, where it concluded there had been "serious breaches of duty."

The investigation followed wide-ranging allegations made in German news magazine Der Spiegel at the end of last year, which detailed a culture of bullying and fear at the center under Frehse. Two former national team gymnasts interviewed by DW confirmed those allegations and indicated that the problem was more widespread than just in Chemnitz.

Conducted by an external law firm, the investigation found that "in 17 cases there was sufficient factual evidence for the use of psychological violence by the coach," while in other cases gymnasts were given high-strength painkillers without a prescription, and forced to train and compete through injuries.

The law firm spoke to Frehse as part of the investigation, stating that "for the most part, she has denied the behavior of which she is accused."

The DTB apologized to "all the affected gymnasts for the suffering that has arisen," adding: "Based on current knowledge, it is certain that the measures taken by the DTB in 2018 and 2019 were not sufficient to fully clarify the facts reported at the time and to have a preventive effect."

Those measures related to complaints made against Frehse by world champion Pauline Schäfer and her sister Helene in 2018. In response to the complaints, Frehse was temporarily suspended from working with the national team but was allowed to return to the youth setup soon after.

While the scope of the investigation was limited to what happened in Chemnitz, the DTB said it couldn't rule out that there had been misconduct at other training centers.

"It is important to bring about changes to the overall structural and cultural process, both within the DTB and beyond, to ensure that such incidents and developments are excluded as far as possible in the future," the federation wrote in its 13-page summary of the investigation. "The mistakes and inadequacies of the past must not be repeated."

Among the changes proposed, the DTB said it would look into establishing an independent watchdog to oversee complaints and, together with other countries, work towards increasing the minimum age for senior international competition from 16 to 18, a move that would help reduce the pressure on young gymnasts.

A former world-class German high diver says he was sexually abused by his coach for over a decade. The news has sparked fresh calls for more to be done to protect athletes from sexual predators.

Two former national team gymnasts have opened up to DW to share their experiences of bullying and mistreatment in the sport. They say the problems in Germany are wider than previously reported.

More than 300 victims were abused by doctor Larry Nassar, who was jailed in 2017. Victims spoke of the "hellish" five-year court ordeal and therefore "it was in the best interest of everyone to accept this settlement."