Germany's defense ministry has said it will abandon its plans to build the high-altitude Euro Hawk reconnaissance drone. Flight clearance issues in European airspace were the key factor in the costly cancellation. 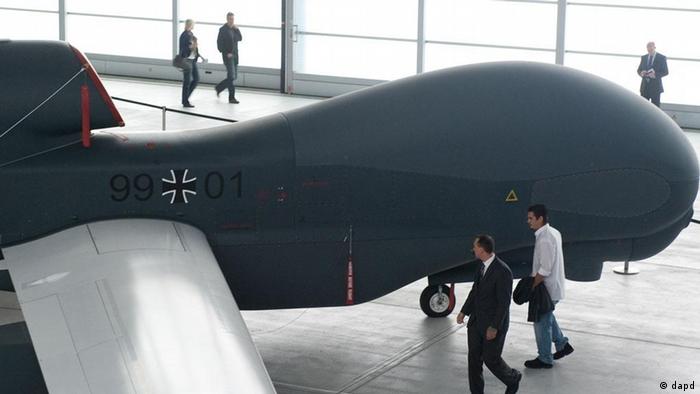 Germany on Tuesday abandoned plans for an unmanned, unarmed surveillance drone capable of flying at high altitudes for extended periods. Four "Euro Hawk" drones were planned for the German military, with a costly test-flight in Bavaria on Thursday already purchased. To enable that flight, regional airspace had to be cleared, a problem that helps explain why the project as a whole has been grounded.

German news agency DPA quoted unnamed defense ministry sources as saying "we're pulling the rip chord" on a project that was scheduled to cost 1.2 billion euros ($1.55 billion). More than half a billion euros have been pumped into the plans already, with some of the costs covered by aerospace giant EADS instead of the German taxpayer. Some of the components, like high-grade sensors, will be retained, in the hope that they can be used on other aircraft.

Public broadcaster ARD reported that ministry sources were concerned that a flight permit for European airspace could cost in excess of 600 million euros, if it was even granted.

The decision was set to be announced formally in parliament on Wednesday, with a defense ministry source saying that "a horrid end is better than an endless horror."

The Euro Hawk was to be a larger, more advanced version of the RQ-4B Global Hawk made by Northrop Grumman, a plane that has been in service for more than a decade. From a cruising altitude of around 20,000 meters (65,600 feet), the Global Hawk can remain airborne for up to 40 hours.

The German Bundeswehr military, which is reportedly seeking armed drones, probably from the US, was not planning to arm the Euro Hawk. It was the largest German military project to be abandoned entirely.