The foreign ministers of Germany, France and the UK will meet in Brussels next Tuesday to discuss the Iran nuclear deal. The Iranian foreign minister is due to join the group later. 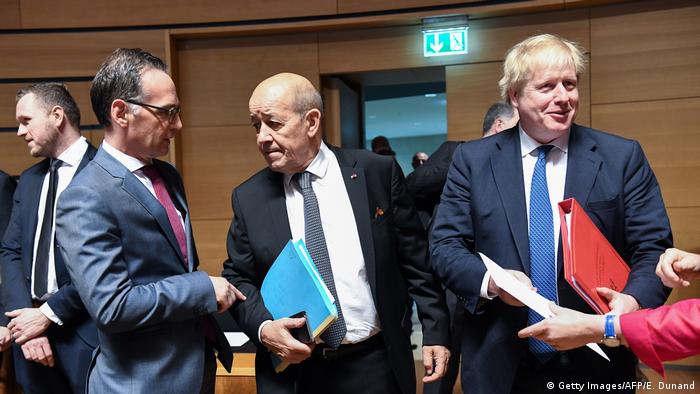 The EU's top diplomat, Federica Mogherini, is to host a meeting of the German, French and UK foreign ministers next Tuesday in Brussels, where they will discuss the future of the Iran nuclear deal following the withdrawal of the United States earlier this week, the European External Action Service said in a statement on Friday.

The meeting comes amid widespread concern within the bloc at US President Donald Trump's decision on Tuesday to take his country out of the deal, seen by many as crucial for the security of the region.

German Chancellor Angela Merkel on Friday expressed "great regret" at the US move, saying that it "damaged trust in the international order" when a country unilaterally withdrew from an agreement that had been unanimously approved by the UN Security Council.

Merkel also held a telephone conversation with Russian President Vladimir Putin during which both leaders reaffirmed their commitment to upholding the nuclear deal, the Kremlin said in a statement.

"The situation around the Joint Comprehensive Plan of Action following the unilateral withdrawal of the US was discussed. The importance of preserving the deal from a point of view of international and regional stability was highlighted," the statement said.

The phone call came after a meeting between German Foreign Minister Heiko Maas and his Russian counterpart Sergey Lavrov in Moscow on Thursday, where both diplomats agreed that the deal should remain in force. Maas urged Russia to use its influence to encourage Tehran to stick to the terms of the deal, which requires Iran to refrain from any activities that could lead to the creation of nuclear weapons. In exchange, international sanctions imposed on Iran because of its alleged pursuit of a nuclear arsenal have been lifted.

The deal was brokered after nearly 20 months of negotiation between Iran and the United States, Germany, Britain, China, Russia and France, as well as the European Union.

Trump's announcement on Tuesday that he was pulling his country out of the deal continues to reverberate around the world.

Thousands of Iranians took to the streets on Friday to protest against the decision, with Iran saying that it might resume uranium enrichment at a higher rate within weeks if its benefits from the deal fall flat after the US pullout.

However, US allies Israel and Saudi Arabia have welcomed the US move, with both nations seeing Iran as a regional archrival that must not be permitted to have nuclear weapons at any cost.

Tension mounts between Israel and Iran