Germany's foreign minister said Sunday, July 27, that the upcoming Olympic Games would herald a major "opening up" of Chinese society and urged Beijing to do more to ensure the rights of its minorities. 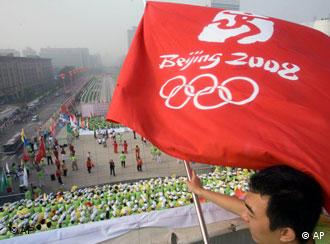 Writing in the daily Frankfurter Allgemeine Zeitung, Frank-Walter Steinmeier said Beijing's hosting of next month's Olympics would see "a big opening up of China."

Steinmeier wrote that the country must "respond to its growing responsibility," adding: "all ethnic groups must have a share in the development of this multicultural nation, where human rights and fundamental freedoms must be guaranteed and the state and society must open up more."

China's human rights record has come under increasing scrutiny in the run-up to the Games, with its global Olympic flame procession interrupted by pro-Tibet demonstrators in the United States, Britain and France.

Steinmeier's opinion piece, to be published Monday, said that in a world which is constantly remaking itself China would have a key role to play. 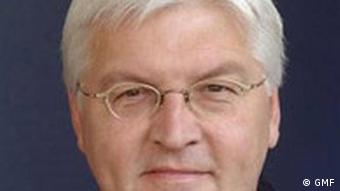 However, "concrete improvements" would be necessary, the foreign minister said, adding "we must, of course, discuss Tibet."

There has been pressure, especially from rights activists, on world leaders to boycott the opening ceremony of the Beijing Olympics on August 8. Neither Merkel nor Steinmeier are attending the Games or the ceremony, but have spoken out against any boycott of the event.

Other leaders, such as US President George W. Bush and French leader Nicolas Sarkozy, have announced they will go to the opening ceremony. 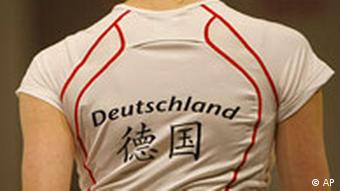 These official shirts won't likely offend the Chinese, while the human rights T-shirts might

German athletes soon to be on their way to Beijing were presented with T-shirts on Saturday by a group of former competitors to take with them to the Olympics. The shirts highlighted human rights issues.

China has ruled Tibet since 1951, a year after sending troops in to "liberate" the remote Himalayan region. The Dalai Lama fled his homeland in 1959 following a failed uprising and has since lived in exile in India.

China accuses him of being a separatist, but the 1989 Nobel Peace Prize winner insists he does not want independence for Tibet. However he has repeatedly said he wants greater autonomy for Tibet under Chinese rule as well as an end to religious and cultural repression.

Swimmer Britta Steffen and gymnast Fabian Hambuechen feel the burden of the whole country as both look to give Germany Olympic gold in glamour sports at the Beijing Games. (22.07.2008)