German firm threatens to sack workers involved in Iran demonstrations | Germany| News and in-depth reporting from Berlin and beyond | DW | 31.07.2009

German company Knauf has come under fire after it sent a letter to all of its employees in Iran, threatening to immediately fire anyone participating in the demonstrations against the regime in Tehran. 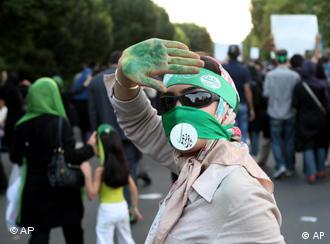 On July 21, Knauf sent out a letter to its three subsidiaries operating in Iran. The document is addressed "to all employees of Knauf Iran, Knauf Gatch and Iran Gatch," threatening that if anyone from the company "gets caught demonstrating against the current government, he or she will be immediately dismissed."

The letter is signed by Isabel Knauf, a member of the founding family of the Bavaria-based construction materials company. She's on the supervisory board of Knauf's operations in Iran.

When news about the letter surfaced in the German media, it immediately triggered criticism and condemnation, and Iranians living in Germany have bombarded the company with threatening calls and e-mails, company spokesman Joerg Schanow said on Friday.

Schanow confirmed the letter was sent but he called the wording of the document very "unfortunate." He said it didn't correspond with the company's overall policy but declined to give a detailed explanation.

In the letter, Isabel Knauf justified the threat to dismiss staff by saying that Knauf was "strictly apolitical" and reminded "all employees that they are not only representing their private opinion when being politically active, but that their actions could fall back negatively on our Knauf companies in Iran."

The Federation of German Wholesale and Foreign Trade declined to comment on this particular case but said that "in general, German companies should differentiate between business and politics."

Germany's foreign office on Friday could not confirm the case but said that it rejected the idea of companies intervening in such a manner.

"We would not welcome this news and do not approve of it," a spokesman for the foreign office said. Berlin has been a strong critic of Tehran over the crackdown on pro-opposition demonstrators.

According to a report in the Wall Street Journal, however, there may be concrete reason behind Knauf's decision to send out the controversial letter. The newspaper says that a senior German-Iranian employee of the company had been arrested during earlier demonstrations. It says the Tehran authorities told Knauf that their executive would only be released if it forced its employees to refrain from any involvement in the pro-opposition protests.

Iran has been rocked by continued demonstrations since the June 12 presidential elections returned the incumbent, Mahmoud Ahmadinejad, to power. The opposition says the elections were rigged and has demanded a new vote.

Germany is one of Iran's most important trading partners, with around 85 German companies operating in the country. Knauf has been in Iran for several decades. Worldwide, the company employs around 22.000 people.

Hundreds of people gathered in Berlin, thousands in cities around the world to support opposition protestors in Iran. The demonstrations coincided with reports that a protester had died in custody in Iran. (25.07.2009)

Almost 100 Iranians living abroad, some of them in exile, have gathered under Berlin’s Brandenburg Gate to demand the release of all political prisoners and an end to the Tehran regime. (24.07.2009)