German Family Fled to US for Educational Freedom | Germany | News and in-depth reporting from Berlin and beyond | DW | 01.02.2009

German Family Fled to US for Educational Freedom

Germany is normally a country people seeking asylum go to. But one young, religious German family has left their homeland for the United States so that they could teach their children as they see fit. 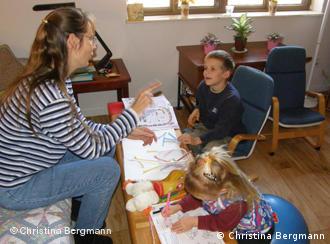 For Damaris, Christian, Josua, Lydia and Daniel Romeike, a school day starts at the table with their father reading the Bible to them -- in English then explaining the words and expressions in German.

Uwe and Hannelore Romeike are educating their children, aged 3 to 11, at home. That's illegal in Germany, so last August they moved to a small town in the US state of Tennessee.

Germany is one of the few countries in Europe not to allow home education. Sometimes German authorities turn a blind eye toward parents who teach their children themselves, but the Romeikes say they had no choice but to move abroad after authorities came to their home to enforce the law.

"The police were knocking at the door, and one day they took the children to school, and the children were crying because the policemen took the schoolbags by force," Uwe Romeike told DW-RADIO. "They were really rude -- especially to my wife."

In addition to noticing Daniel and Lydia become quiet and more prone to crying for the few years they attended a German school, the deeply religious Romeikes say they objected to the content of the instruction their children received.

"We noticed that the school books always reflect certain values, that education cannot be neutral," Hannelore Romeike said. "We communicate our values, the teachers communicate theirs, and if the kids are at school, we cannot have an influence on what they learn."

At home, the Romeikes decide which books the children read and which lessons they learn. They do not let their children read Harry Potter novels, for instance, because they are about witchcraft and the occult.

But parents who maintain an influence on what their children learn by ignoring German rules on mandatory school education can face hefty fines and even jail sentences. That's why the family now hopes that their application for political asylum will be successful and that they will be granted permanent residence and work permits in the United States. 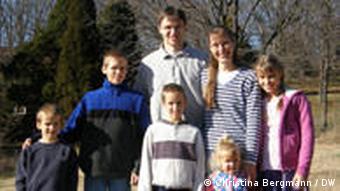 The Romeikes are hoping to start a new life in Tennessee

The Romeikes have a well-organized support network that centers around the Home School Legal Defense Association (HSLDA), which supports their application for asylum.

The United States offers political asylum to people who have a well-founded fear of persecution for being a member of a religious, political or social group if they were to return to their home country, according to HSLDA Staff Council Mike Donnelly.

"We believe that homeschoolers in Germany represent a social group and so we think that they definitely have a fear of persecution because the fines [can be] anywhere from a 1,000 up to 50,000 euros," Donnelly said. "They threaten parents with custody actions by getting the family court involved and they also threaten them with prison."

In 2007, an estimated 1.5 million children in the US -- equal to 2.9 percent of the school-age population -- were educated at home, according to a December 2008 report from the US National Center for Education Statistics. The National Home Education Research Institute puts the number of home schooled pupils at over 2 million.

Providing religious or moral instruction was the most important reason why parents chose to home school their children with concerns about the school environment placing second, the NCES report said.

German Minister: People Must Invest in Their Own Education

Just days after Germany's controversial education summit, the country's education minister tells DW-TV in an exclusive interview that people can't just rely on the state to pay for their university. (25.10.2008)

A German expert on education and economics said he has little hope that Wednesday's summit between Chancellor Angela Merkel and state education ministers will bring about change -- even though it is sorely needed. (22.10.2008)