In a letter obtained by German media, the country's economics minister says he wants a permanent plan in place to handle the bankruptcy of heavily indebted eurozone member states. 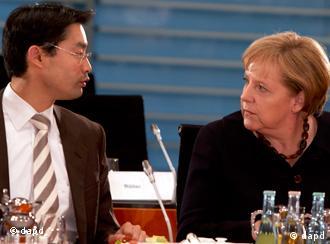 German Economics Minister Philipp Rösler is to push for a plan for the orderly bankruptcy of highly leveraged eurozone countries, according to a letter obtained by the Frankfurter Allgemeine Zeitung (FAZ) newspaper.

The key points of the plan are to be incorporated into a draft treaty on the European Stability Mechanism (ESM) - the permanent eurozone financial aid program which is supposed to succeed the temporary European Financial Stability Facility.

According to the FAZ report, Rösler, who leads the Free Democrats, the junior partner in Chancellor Angela Merkel's governing coalition, said countries no longer able to bear their debts should be made to enter into a predetermined default procedure and possibly face restrictions on their sovereign rights.

This would involve the given country's temporary loss of sovereignty over its debt, and acceptance of the possibility of capital losses to both debtors and creditors.

"Financial aid from the ESM should only be available if the creditors do their part," the plan stated, according to the FAZ.

The procedure must be overseen by an independent body that would be responsible for organizing and handling negotiations between debtors and creditors. Rösler said a so-called "European Monetary Fund," which would act as successor to the ESM, could assume this role.

Parallel to negotiations, defaulting countries would be made to set up a "credible rehabilitation program" to ensure budget consolidation.

"The goal of such a restructuring process for fragile countries unable to solve their debt problems themselves is to help them regain their economic competitiveness and emerge strengthened from the process," the letter added.

The goal would not be to make the given country go "bust," but to help it make its economy "fit" again.

Michael Fuchs, vice-chairman of the Christian Social Union and Christian Democratic Union parliamentary group, told broadcaster Südwestrundfunk that it made sense to set up such an emergency intervention procedure given the current economic climate.

Fuchs added he thought Greece was headed for default and that comments by Eurogroup head Jean-Claude Juncker to the contrary were unfounded.

The euro crisis has opened a rift in Germany's ruling coalition government. While Chancellor Angela Merkel has warned against rash statements, Vice Chancellor Philipp Rösler has said nothing is now taboo. (14.09.2011)

Merkel warns leaders to watch their words on Greek debt

Several German politicians have been speaking openly about the chance that Greece may go bankrupt - or may have to abandon the euro. But the German chancellor has said such words only make things worse. (13.09.2011)

As confidence in Greece's ability to control its public debt weakens, politicians in Germany are becoming more pessimistic about the country's future. Bankruptcy and a return to the drachma are no longer taboos. (12.09.2011)