The German and Dutch defense ministers have visited their countries' NATO missile units in Turkey, designed to thwart attacks from war-torn Syria. Their visit precedes a tour by German Chancellor Angela Merkel. 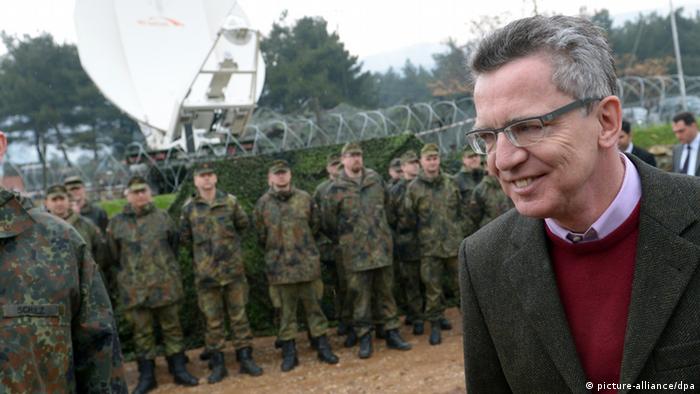 Germany's Thomas de Maizieré and his Netherland's counterpart Jeanine Hennis-Plasschaert visited a Dutch Patriot missile unit in Adana and then Germany's unit at Kahramanmaras, which lies 100 kilometers from the border with Syria.

They, together with host Turkish defense minister Ismet Yilmaz, insisted that NATO's mission, which also comprises a US unit near Gaziantep city, was purely a defensive measure. Turkey had asked its NATO partners for missile support late last year.

Germany has sent 240 soldiers to southern Turkey as part of a NATO mission using Patriot missiles to deter cross-border airstrikes from war-torn Syria. Units are also being provided by the Netherlands and the US. (21.01.2013)

"In case anyone in Syria comes up with dumb ideas then it won't be Turkey or Germany or the Netherlands standing here. It will be NATO," de Maizieré said on Saturday as he visited Germany's 309 soldiers assigned to the NATO mission.

Yilmaz said he hoped the nearly two-year-long war in Syria would soon be over. Before NATO deployed the Patriots, Turkey had exchanged sporadic cross-border fire with Syrian regime forces.

In her weekly video message on Saturday, Merkel reiterated her skepticism about Turkey's bid for EU membership but said she favored the opening of a "new chapter" or policy discussion points at talks.

Turkey has completed only one of 35 policy "chapters" to gain accession. All but 13 are blocked. The European Union says Ankara does not meet EU standards on human rights and freedom. Turkey has complained of a lack of support.

COVID vaccine: Moderna shots can be 6 weeks apart, WHO says 27m ago