German Defense Minister Ursula von der Leyen has denied allegations that she plagiarized a doctoral dissertation that she wrote 25 years ago. The minister has asked for the thesis to be reviewed by an independent panel. 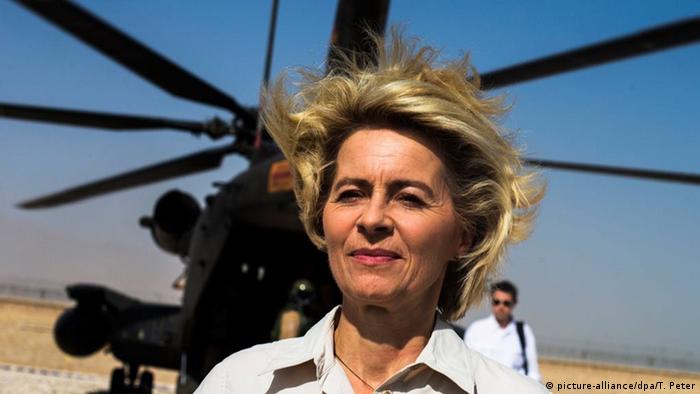 In an interview published on Monday, Von der Leyen, who is viewed by some as a likely successor to German Chancellor Angela Merkel, denied the accusation of plagarism.

"I can reject the accusation of plagiarism," Von der Leyen told the Funke Media Group in the interview, responding to allegations leveled at her by the internet platform VroniPlag, which examines academic works to check for instances of plagiarism.

Accusations of plagiarism have a particular resonance in Germany, where academic titles are held in especially high esteem. Two former cabinet ministers, von der Leyen's predecessor in defense Karl-Theodor zu Guttenberg and the former education minister Annette Schavan, had to quit after their Ph.D theses were found to have contained passages lifted from other texts.

"It's not new that activists on the internet try to spread doubts about the dissertations of politicians," said von der Leyen.

The minister said she had asked to have her dissertation checked by an independent panel of experts as soon as she heard it was being questioned in August. "As far as I know, the experts are working on that now," she said.

'Not a borderline case'

Von der Leyen is accused of lifting text in her obstetrics doctorate word-for-word from other sources, without proper attribution.

The thesis was examined by the Berlin-based law professor Gerhard Dannemann, who published his findings on VroniPlag. "n think the flaws are more severe than in the case of Mrs Schavan," Dannemann told Süddeutsche Zeitung newspaper in an interview that was also to be published on Monday. "We're not talking about a borderline case here."

Shavan left the education ministry after she was stripped of her doctorate by the University of Düsseldorf, which ruled she had "systematically and intentionally" plagiarized part of her thesis.

Guttenberg was forced to quit as defense minister a year earlier after it came to light that that his thesis had been plagiarized.

In 2013, similar allegations were leveled against German Foreign Minister Frank-Walter Steinmeier, although these were dismissed by an investigating committeee.