It's the club's biggest game in 35 years. Fourth-division 1. FC Saarbrücken host Bundesliga side Bayer Leverkusen in the cup semifinals. An uneven matchup? Not at all, insist the Saarbrücken supporters. 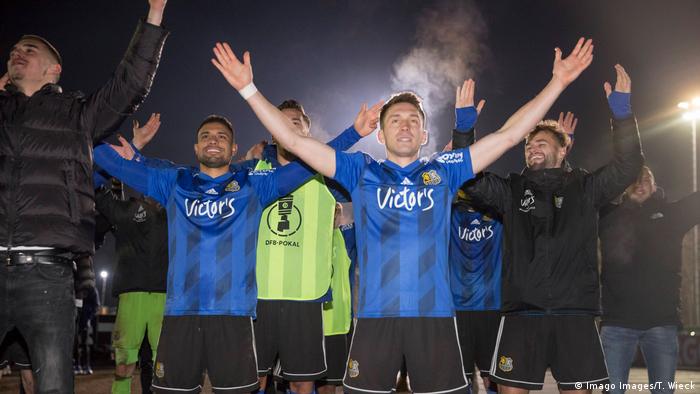 The windows have been washed, 1. FC Saarbrücken's coat of arms is on one of the bar tables and fan scarves hang like little trophies on the wall of the clubhouse of a Saarbrücken fan club.

Before the all-important German Cup semifinal against Bayer Leverkusen on Tuesday, there is a lot to talk about. Sometimes loudly, sometimes quietly — but always with social distancing.

Because of the coronavirus pandemic, big fan gatherings are not allowed at the moment, and the showdown with the Bundesliga giants will also take place without their loyal supporters.

"This is very, very bad," says Gerd Heinzkill from the FCS Onkelz fan club. "We always support our team in the stadium one hundred percent. And the fact that we can't be there now breaks my heart."

His comrades nod in agreement. Head coach Lukas Kwasniok's players will be on their own for the club's biggest game in decades.

"It should be a public holiday for Saarbrücken, for the whole  Saarland state and for us," says Kwasniok. "We wanted to cause a sensation together with the fans and now we're trying to somehow make it happen on our own."

The 38-year-old faces the biggest challenge of his still-young coaching career, not least because his team is out of practice. They played their last competitive match on March 7, a 1-0 to Astoria Walldorf in the Regional League South-West, one of five regional divisions which make up the fourth tier of the German football pyramid.

The league season was canceled at the end of May due to the coronavirus pandemic and, as league leaders, Saarbrücken have been crowned champions and have been promoted to the third division. Since then, the team has been trying to train under competitive conditions, but not even friendly matches have been permitted.

"We've waited six years for this, so of course it is sad we can't be there," says Bernd Gauer, chairman of the 1. FCS Fankultur 1976 fan club. But he adds: "It's better that we've achieved this without us being there than not achieving it at all. We're glad to finally be moving up." 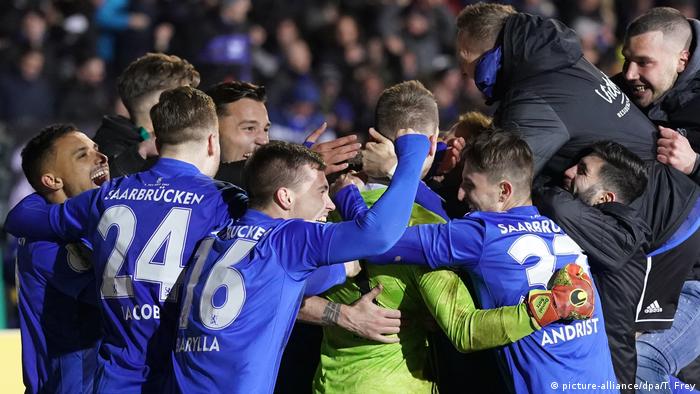 1. FC Saarbrücken have already knocked out two Bundesliga opponents in the German Cup this season.

For the club near the French-German border, things are finally looking up again after a long dry spell. And when Bernd looks back on the past decades, he has to take a deep breath.

From the dizzying heights of the Bundesliga to the depths of the fifth tier, he and his comrades have also seen their black-and-blue shirted heroes play in the biggest stadiums and the smallest village pitches.

"Once you've given your heart to a club, you stay true to it. No matter where the journey takes you," explains Bernd, who has been passionate about Saarbrücken since 1976. And why not? After all, Saarbrücken's story is unique in German football.

After the Second World War, the Saarland first fell under French occupation and then declared independence, and didn't rejoin West Germany until 1957. In the 1948-49 season, 1. FC Saarbrücken were granted entry to the French second division, although their results weren't counted in the standings. Had they counted, however, Saarbrücken would have won the league and still consider themselves "unofficial champions" today.

Back in Germany, Saarbrücken became one of the founding members of the Bundesliga in 1963. They were the first German team to play and beat Real Madrid, they won against AC Milan and they once beat Bayern Munich 6-1.

But those days are long gone. Their last game in the Bundesliga was 27 years ago. Still, even at matches in the fourth division, an average of 3,000 spectators turn out at the stadium. "We're like one big family," explains Bernd. 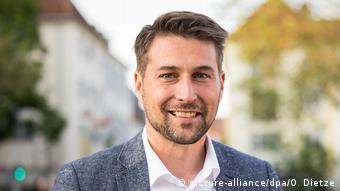 The solidarity in the small Saarland town is impressive. Shortly before the clash with Leverkusen, the flags in front of city hall were changed. Now four large club flags fly in the wind, making absolutely clear the importance of the German Cup match.

"Football is like a barometer for this region. It stands for the ups and downs, the joy and sorrow, just like FC Saarbrücken with its promotions and relegations," says city mayor Uwe Conradt in an interview with DW.

"The club is a symbol for a region that is on the rise and which says: We are here and we take ourselves seriously."

After Saarbrücken's promotion to the third division, the game against Bayer Leverkusen is now going to bring a perfect football year to a close. But coach Kwasniok's team want to cause a sensation and and go even further, reaching the German Cup final even without the support of fans in the stadium.

"We don't know what it will be like," he admits. "Still, I'm a bit afraid that, if worst comes to worst, we won't be able to follow social distancing rules."

The mayor has extended the curfew for the city of Saarbrücken until midnight so that the fans could continue to celebrate in the pubs in case of a penalty shootout. Because a victory would be "similar to Germany winning the World Cup. I can imagine that this city and the whole region would be jumping for joy." 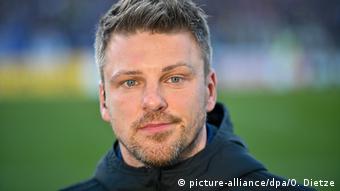 The dream lives on. Bernd and the other fans are hopeful. After all, Saarbrücken have a pretty decent record against Leverkusen.

"We've won all our home games against Leverkusen to date and lost only one game against Bayer overall." The 56-year-old can't help but grin a little because those statistics are based on just four matches. That's why Bernd has written a letter to the team saying: "You don't have a chance, but you know how to use it."

After Cologne and Düsseldorf, Leverkusen would be the third Bundesliga club to fall at the hands of fourth-division Saarbrücken, who also knocked out second-division Karlsruhe en route to the semifinal. They've done it the hard way.

"If we win now, it'll be really something," says Gerd. "We'll have to go into town and celebrate properly with the guys. Peacefully, of course, with social distancing and a face mask."

RB Leipzig have developed from a lower league club to a top team in the Bundesliga. Now they've won their first title. Thanks to Red Bull's sponsorship, RB has taken a very different route from "normal" clubs.

RB Leipzig's first major trophy: 'The club belongs to the people who identify with it' 21.05.2022

On a historic night for German football, RB Leipzig deserved their first major trophy. The Red Bull construct remains controversial and unpopular, but it has tapped into a mentality in Saxony which simply doesn't care.