German Court Throws Out Attempt To Ban Right-Wing Party | News and current affairs from Germany and around the world | DW | 18.03.2003

Federal Constitutional Court justices ruled on Tuesday that the use of informants created bias in the government's attempt to ban the National Democratic Party. A new effort to ban the party is unlikely. 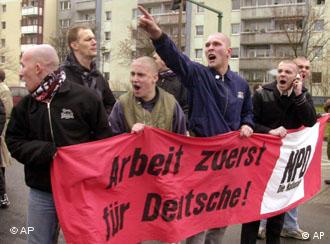 Marching for their cause: NPD members protest in Potsdam last November.

Chancellor Gerhard Schröder originally saw the idea as a simple "bit of political hygiene." He and other German leaders would ask the country's highest court to ban the right-wing extremist National Democratic Party (NPD) as a way of removing some unsightly litter from the country's political landscape.

But Schröder's scrubbing action soon got bogged down in a legal mess of its own. After filing the petition in 2001, officials eventually had to concede that their case was based in part on statements made by government informants who were members of the party's leadership.

On Tuesday, the German Constitutional Court threw out Schröder's effort because of the government's infiltration of the party. The question before the court was actually a procedural one: Should the court continue to consider the case? To push it forward, a two-thirds majority of the seven judges would have had to vote yes. But only four supported a continuation of the case.

"The state's presence in the party's leadership makes its participation in the development of political positions and activities unavoidable," said Justice Winfried Hassemer, who was among the three justices who voted no. But Hassemer said the decision had nothing to do with the main issue of whether the party deserved to be banned.

Two parties were banned in the past

In Germany, a political party can be banned if the court determines that the group is a threat to the country's democratic order or seeks to overturn that order. In the nearly 54-year history of the Federal Republic of Germany, the court has banned only two parties. In 1952, it banned the Socialist Reich Party, in which former Nazis had collected, and it forced the Communist Party of Germany to disband in 1956.

The push to ban the NPD began in August 2000 following several weeks of highly publicized cases of right-wing violence, 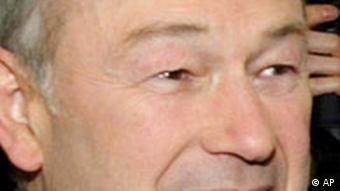 including the killing of the African Alberto Adriano in the eastern city of Dessau. In August, Günther Beckstein (photo), interior minister of the state of Bavaria, called on the federal government to begin preparing the application, citing the growing number of violent skinheads and neo-Nazis who he said were joining the party. Schröder soon joined the effort, and eventually all major parts of the country's government -- the cabinet, the legislature and the states -- filed petitions with the court in Karlsruhe.

The effort was directed at a party that was founded in 1964 by a number of right-wing groups. A position statement on the party's Web site once said the party opposed such things as "domination by outsiders," and favored "a new social order in Germany that corresponds with our view of mankind." The party has about 6,500 members and won 0.4 percent of the vote during the Sept. 22 national election.

Beckstein said on Tuesday that he was disappointed by the decision. "It limits the action that a democracy can take to defend itself from parties that oppose the constitution," he said.

Despite his disappointment, Beckstein said he would not make another attempt to the ban the NPD.

One of Beckstein's political opponents saw the decision as a "legal and political disaster," and blamed him and the federal interior minister, Otto Schily, for it. "Mr. Beckstein and Mr. Schily carry a large amount of the blame," said Guido Westerwelle, leader of the small Free Democratic Party.

Former German Chancellor Helmut Schmidt has taken the bull by the horns in a controversial book where he calls Germans xenophobic at heart. His comments have touched a raw nerve and kicked up a row among politicians. (April 4, 2002)

Government Under Fire for Neo-Nazi Informants

In the latest scandal involving the domestic intelligence agency's use of informants, reports allege the government looked the other way as two extremist spooks produced a CD inciting the murder of prominent German Jews. (Sept. 9, 2002)