German Court Orders PETA to Halt Campaign | News and current affairs from Germany and around the world | DW | 20.03.2004

Animal rights group PETA will have to pay a hefty fine if it continues a controversial advertising campaign in Germany comparing battery hens to Holocaust victims after a Jewish group won a temporary injunction. 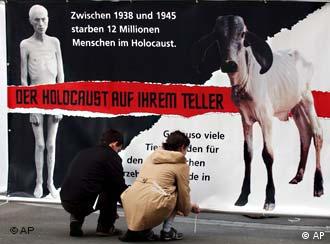 The campaign was also launched in Switzerland.

PETA, which stands for People for the Ethical Treatment of Animals, will have to pay up to €250,000 ($307,000) should it continue the campaign via posters, flyers, the Internet or other means, according to the Central Council of Jews in Germany, which filed the complaint. On PETA's web site, the pictures could still be seen on Saturday.

The campaign had opened in Germany on Thursday to protests from the Jewish community. It likens the slaughter of animals to the murder of Jews under the Nazis.

The adverts, entitled "Holocaust on a plate," show pictures of battery hens packed into cages next to images of emaciated Jewish inmates in Nazi concentration camp bunk beds. Officials from PETA have said that the posters are designed to raise public awareness of what they call the maltreatment of animals before they are slaughtered.

Posters from the campaign went up in the city of Stuttgart ahead of a Europe-wide rollout that would take in a further 11 cities before the campaign closes on April 8. PETA's insistence on going ahead with the campaign in Stuttgart prompted the Central Council of Jews in Germany to take the case to the courts. Paul Spiegel, the council's president, told reporters that he would ask prosecutors to charge PETA with "inciting racial hatred."

A violation of human dignity

Spiegel urged PETA to drop the "disgusting adverts," calling them "a violation of human dignity, especially of the Holocaust victims."

In response to the complaint by the Central Council of Jews, campaign coordinator Matt Prescott, himself a Jew, issued a statement saying he was aware of the council's views, but added: "We are not willing to end the campaign."

"Auschwitz begins when someone stands in a slaughter house and says, 'It's just animals,'" reads the quote from German philosopher and sociologist Theodor Adorno on the Peta poster.

Stuttgart prosecutor Eckhard Maak told the Berliner Zeitung newspaper on Wednesday that PETA should think twice before going ahead with the campaign in Germany, since federal law requires that severe punitive measures be taken against anyone who belittles or denies the Holocaust, handing down large fines or sentences of up to five years in prison for anyone found guilty. He added that if the campaign went ahead "then you can expect the police won't shut their eyes."

"PETA equates an abuse which they consider despicable with the crimes of the Holocaust," Maak said in the interview. However, he added that the trivialization of Holocaust images was not included in the right of free speech in German law. "The historical crime of the Holocaust is so unique that the legislator has afforded it with special penal regulations."

The posters have already been condemned in the United States after PETA ran the campaign there last year. The Anti-Defamation League demanded that the posters be removed immediately. Abraham Foxman, head of the League and himself a Holocaust survivor, raged: "The effort by PETA to compare the deliberate, systematic murder of millions of Jews to the issue of animal rights is abhorrent. Abusive treatment of animals should be opposed, but cannot and must not be compared to the Holocaust.”

But PETA remained firm despite having its posters banned in nearly 20 cities across the United States with four more banning the television commercials that accompanied them.

However, the organization's enthusiasm was undimmed. "It was our second-best campaign," PETA’s Bruce Friedrich told the Berliner Zeitung. “After the Holocaust campaign, many Americans have become vegetarians,” he claimed. Friedrich said he saw nothing wrong with the controversial comparison between Holocaust victims and battery hens. "Animals feel the same pain as people."

In a publicity stunt, activists from People for the Ethical Treatment of Animals (PETA) have offered the northern Germany port city of Hamburg €10,000 ($11,030) to change its name to "Veggieburg".