A controversial German artist who works with cadavers faces new controversy after trying to expand to Poland, where his father, who leads the project, allegedly served with the SS. 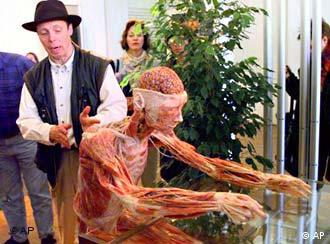 Gunther von Hagens, known for his displays of preserved human corpses stripped of skin and dissected, wants to build a laboratory and warehouse in conservative and staunchly Catholic Poland to mass-produce his art, local officials told Reuters recently.

Von Hagens has already bought land and industrial buildings in the small, western Polish town of Sieniawa Zarska, population 1,150, near the German border. He appointed his father, 88-year-old Gerhard Liebchen, to set up the project: storing bodies and preparing them for plastination, which replaces body fluids with plastics in order to preserve them.

"His father told us what he plans to do here -- Von Hagen plans to open a plastination factory of human bodies," senior town official Andrzej Chwiedacz told Reuters. "Von Hagen's father is trying to convince us and our people why it is good for our town."

The venture promises to eventually employ up to 300 people in the new EU country, where labor costs are far less than in Germany and unemployment reaches up to 18 percent. 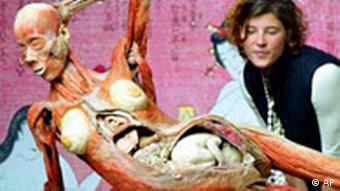 But things became trickier after German newsmagazine Der Spiegel reported last month that Liebchen "appeared to be actively involved" in the SS and helped carry out Nazi repression of Poles during World War II. The magazine also published a list of 60 people deported in 1940 from the southwestern town of Skalmierzyce to concentration camps allegedly based on a list compiled by Liebchen.

The Polish authorities announced they would examine the allegations, after which von Hagen said his father would no longer play a role in the project.

I have only learned of these accusations, including the suggestion that my father was in the SS, in the last few days," he said in a statement to AFP. "In view of the historical responsibility of Germany…it is essential for me that my company be free of any suspicion." 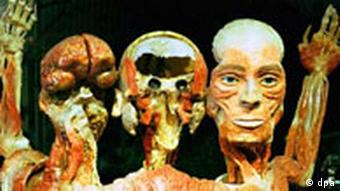 The plastination process, invented by von Hagens, is the craft of preserving human bodies by replacing the natural body fluids with solid plastic. Plastination both preserves tissues and gives rigidity, enabling the corpse and the organs to be displayed in exhibitions.

Employing the process, von Hagens created his "Body Worlds" exhibition made up of 175 body parts and 25 corpses, including the bisected body of a pregnant woman with her womb cut open to reveal the fetus.

Though millions have visited his exhibitions, others have criticized the exhibitions as macabre, exploitive and called him a "modern-day Frankenstein."

He has also faced probes in several countries for breaching laws in his handling of corpses where authorities tried but failed to stop his exhibitions. Last year, German prosecutors became interested after allegations arose accusing him of obtaining and using the bodies of executed prisoners in China.

On March 22, von Hagens goes again before a Heidelberg court on charges of illegally using the title of professor, which he received in China. He has called the charges "absurd."

A German anatomist whose exhibit of preserved corpses has drawn crowds and controversy in Europe and Asia was fined Tuesday for misusing an academic title awarded by a Chinese university. (March 2, 2004)

German Accused of Using Bodies of Executed in Exhibits

A professor who preserves human bodies for display in exhibitions allegedly used remains of people executed in China. The controversial artist has so far claimed that he only works with bodies of voluntary donors. (Jan. 17, 2004)

Case of Russian Corpses Back to Haunt Von Hagens

Gunther von Hagens, the man behind the controversial ‘Body Worlds’ exhibition, is facing renewed investigation into 56 corpses which the so-called Doctor Death acquired from Russia for the purposes of plasticization and display. (Jan. 22, 2004)