The holding company of a German department store and mail-order business is getting a new name and hopping on the "re-branding" bandwagon, but some experts say fresh nomenclature doesn't always lead to an enhanced image. 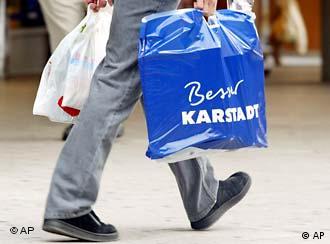 What's in a name? That's a question people at branding agencies across the world wrack their brains over every day.

"The name is the brand's strongest and most present ambassador," said Philippe Wiede of the Swiss branding agency megapublic, one of many "name creation" consultancies which come up with catchy names intended to be accessible to people who don't share the same mother tongue.

Now, the KarstadtQuelle company -- one of Germany's most well-known retailers -- is revamping its moniker. Once shareholders give the nod to the new nomenclature in May, the holding company will be called "arcandor."

That's the name KarstadtQuelle CEO Thomas Middelhoff said is supposed to convey that the company is a department store, mail-order service and tourist agency all in one -- and do it by evoking positive associations of dependability, loyalty and courage "regardless of the language the consumer speaks."

Keeping with the times 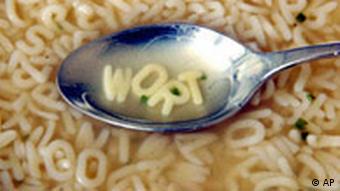 It's all in how you put the letters together

Even though the Karstadt department store and the Quelle mail-order business will retain their names, it's a big switch for a company steeped in tradition.

In an article titled "Markenpolitik" (Brand Name Politics), Sybille Kircher of the Düsseldorf-based agency Nomen wrote that any Marketing 101 instructor will tell you that you simply don't change a brand name unless you want to wipe yourself off consumers' maps.

Yet companies must also keep with the times, Kircher wrote, and the pressures of globalization force some companies to rethink and polish both their image and their name.

"In the last 15 years, the number of products and companies that have undergone a name change have increased disproportionately," she wrote in 2004.

"As our markets turns global and as Internet communications have eliminated country borders at least virtually, so grows the need for brand names that are distinctive and multilingually accessible," he said.

All just a question of semantics? 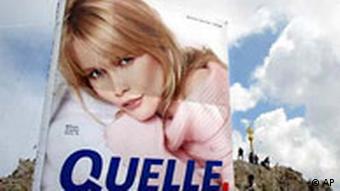 Claudia or Quelle: Which is more likely to get your attention?

Banks, insurance and pharmaceutical companies, telecommunication and consulting firms are just some of many businesses grooming their monikers. Food products in particular have undergone name makeovers in recent years, according to Kircher.

Mergers, strategic realignments of a brand name or company and international expansion are the main reasons companies trade known names for newly fabricated designations, she said.

For instance, "arcandor," "arcelor," a transnational steel company based in Luxembourg, and "aliseca," the technical service of the chemicals company Lanxess, based in Leverkusen, are all made-up names.

Sometimes they're condensed versions of the names of several merged companies. Sometimes they're merged words, such as Lanxess -- a blend of the French "lancer" (to start up or launch) and "success."

And often they're products of major brainstorming and intensive research.

A corporate name or "brand" may take up to a year to develop and includes market and semantic analysis, possibly filtering up to 10,000 names and bouncing the few that make the cut off shareholders.

"One extreme example is Centerpulse," said Wiede. "The Swiss company, formerly known as Sulzer Medica, spent six million euros on their global renaming in 2002," he said, adding that it soon thereafter was acquired by a US company and renamed "Zimmer Global Holdings." 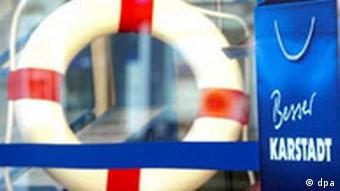 Recently back in the black, a new name may help keep KarstadtQuelle afloat

To make sure a new name brings the right connotations to consumers' minds, Wiede said the agency that created the word gathers feedback from shareholders, the market and the media.

If an opinion piece in the daily Die Welt is anything to go by, KarstadtQuelle stockholders would be smart to keep the title on their shares from switching to "arcandor."

"One can imagine three bald-headed men with horn-rimmed glasses sitting around in meetings for months on to come up with 'arcandor,' while a dozen slickbacks also sit there calculating just how much they can charge KarstadtQuelle for the name," the paper wrote in March.

But some at the soon-to-be "arcandor" holding company may be happy to rid themselves of the hard, crunchy German consonants and capitals in "KarstadtQuelle."

Erik Spiekermann, one of Germany's most respected designers, has been openly critical of the design concept for the 2006 World Cup, from the mascot to the logo. He told DW-WORLD.DE why it hasn't been successful. (12.06.2006)

In its quest to return to profit, German department store chain KarstadtQuelle is opting for a bare bones strategy, selling off 75 of its smaller stores, as well as its SinnLeffers and Runners Point chains. (04.08.2005)

In order to combat consumer malaise in Germany, brands and clothing stores are unleashing “guerilla stores” offering limited clothes for a limited time aimed at building their own image and sales. (14.10.2004)

Some basics on branding

All about German brand names

Lots of goodies about German brand-name abbreviations and acronyms