German Church Leaders Call for Dialogue With Terrorists | Germany | News and in-depth reporting from Berlin and beyond | DW | 11.06.2007

The five-day German Protestant Church congress came to an end Sunday with a service in Cologne attended by over 100,000 people where political and church leaders alike focused on more worldly topics. 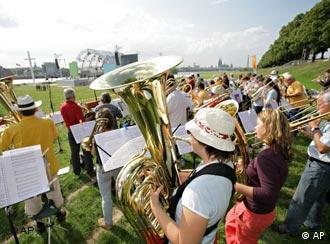 Some 100,000 visitors with orange scarves attended the closing service on Sunday

Speakers at the ecumenical gathering, which included Chancellor Angela Merkel, President Horst Köhler and Nobel Prize laureate Muhammad Yunus as well as numerous German Protestant Church leaders, focused not only on faith but also on some of the same political issues that were discussed at the Group of Eight summit that took place simultaneously in Heiligendamm.

At the closing service on Sunday on the Rhine River, Höppner also called for dialogue with terrorists, including the Taliban. 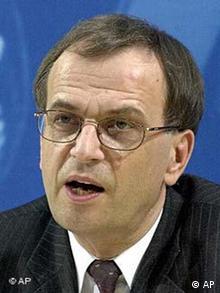 "They also belong at the negotiation table," he said. "Only where my enemy has a place of honor can there be peace."

Huber's comments were criticized by Ayyub Axel Köhler, chairman of Germany's Central Council of Muslims, who accused the EKD of promoting Islamophobia.

On Saturday in Cologne, a day after the G8 summit had ended, Angela Merkel and Horst Köhler spoke at the church congress, where they warned against arrogance in the western world.

"We have to define a mandate for these organizations that says: You are obligated to serve the common good and not just the shareholders in the US and Europe," said the German president. 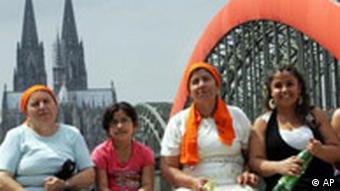 Echoing the G8 discussions, climate change and poverty were also addressed at the church congress. In a speech on Saturday, Reverend Mechtild Werner encouraged Protestants and Christians alike to work towards a more equal distribution of the world's wealth and to face up to the challenge of climate change.

Over a million people attended at least some of the 3,000 events offered at the congress, including around 110,000 visitors who joined in for the entire five days. Dozens of Cologne schools were converted into hostels for 36,000 of the guests.

The city said the event ran peacefully and the number of emergency incidences was "unusually low."

Recalling the Catholic World Youth Day which took place in the Cologne in August 2005, Mayor Fritz Schamma proposed hosting a new "summit of Christians" in the western German city, offering a general invitation to all Christians. Cologne is located in the Rhineland region, which is traditionally Catholic.

The next German Protestant Church congress will take place in Bremen in 2009. A Protestant-Catholic ecumenical convention is being planned for 2010 in Munich.

Merkel: "We Can't Impose Anything on Africa"

A day after meeting with African leaders during the G8 summit, German Chancellor Angela Merkel Saturday warned against Western arrogance in dealing with African countries. (09.06.2007)

European Catholics arrive in Aachen this week to see a 2,000-year-old dress reputedly worn by Mary when she gave birth to Jesus. Christian relics continue to draw crowds, but for most people seeing isn't believing. (02.06.2007)

The bell tolled for a planned Catholic boys' school in Potsdam when the local education authority ruled it breached gender equality laws -- not to mention its backing from the controversial Opus Dei organization. (03.05.2007)