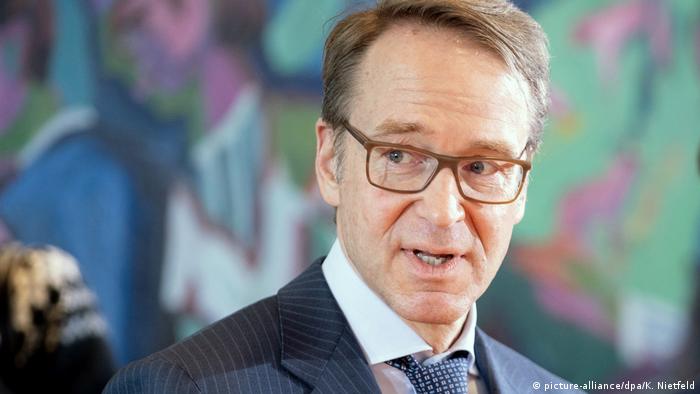 Germany's central bank chief Jens Weidmann on Wednesday submitted his resignation to President Frank-Walter Steinmeier, the Bundesbank in Frankfurt said in a statement.

"I have come to the conclusion that more than 10 years is a good measure of time to turn over a new leaf — for the Bundesbank, but also for me personally," Weidmann wrote in a letter to the Bank's staff on Wednesday.

Weidmann, who has been the president of the Bundesbank since May 2011, is set to leave office on December 31.

In his letter on Wednesday, Weidmann highlighted the "important, stabilizing role played by monetary policy during the during the pandemic as well as the successful conclusion of the strategy discussion as an important milestone in the European monetary policy."

He said that moving forward, it will be crucial for the European Central Bank (ECB) "not only to look one-sidedly at deflationary risks, but not to lose sight of the inflationary dangers either."

National central bank governors in the 19-country eurozone have a seat on the ECB's governing council. Weidmann had repeatedly criticized stimulus efforts by the European Central Bank (ECB) as too loose.

His resignation comes as the ECB faces difficult questions over tackling rising inflation and winding down its massive COVID pandemic stimulus program.

German Chancellor Angela Merkel said she regretted Weidmann's decision and that nominating his successor will be a job for the new German government when it is formed, a spokesperson told reporters.

"Jens is a good personal friend on whose loyalty I could always count," Lagarde said in a statement.

"While Jens had clear views on monetary policy I was always impressed by his search for common ground in the Governing Council, by his empathy for his Eurosystem colleagues, and his willingness to find a compromise."

Weidmann, now 53, was the youngest Bundesbank president when he took over the role from Axel Weber in 2011. Weber had quit in a dispute over the ECB's policy to control the crisis at the time.

Before his role as the Bundesbank chief, Weidmann served as Chancellor Anegla Merkel's economic adviser for five years.

Weidmann studied in Paris and Bonn. In 1997, he started a two-year stint at the International Monetary Fund.