German Federation of Industry (BDI) President Ulrich Grillo has sharply criticized the anti-Islamization PEGIDA protests in Germany. He stressed the importance of immigrants for a strong economy. 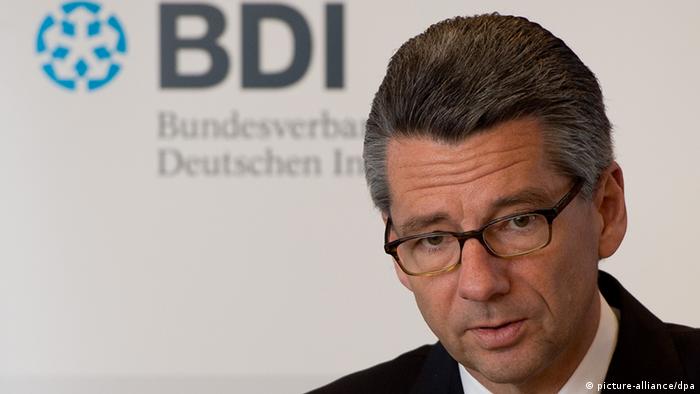 "We've been a country of immigration for some time, and that's how we must continue," the BDI's Ulrich Grillo told the dpa news agency at an event in Berlin on Tuesday. The organization represents more than 100,000 German companies with a total of around 8 million staff.

"As a wealthy country and simply out of Christian love of thy neighbor we should welcome more refugees," he added. The interview was held against the backdrop of the mass anti-Islamization protests that started in October in the eastern city of Dresden under the name "Patriotic Europeans Against the Islamization of the West," or PEGIDA.

"I distance myself very clearly from the neo-Nazis and xenophobes that have gathered in Dresden and elsewhere," he said, adding that he believes PEGIDA is using Islamist terrorism as an excuse to reject and insult Islam as a whole. "It's completely unacceptable. We must fight all kinds of xenophobia," Grillo said.

He also stressed that Germany's aging population depended on skilled labor from abroad, which he says will secure Germany's status as a wealthy country with healthy rates of growth.

"Political leaders need to do much more to try to explain to people the opportunities [resulting from immigration] and to remove fear," he urged. "Our company has for generations employed people from many nations."

Ulrich Grillo's family-run business is located in a part of the western German city of Duisburg which has a large immigrant population.

"We are committed to our neighborhood, and it works out for us," he said.

Opinion: Xenophobia can't be clicked away