Officials in Germany say all 18 missing people have been confirmed dead after a tour bus collided with a truck and burst into flames in the southern state of Bavaria. At least 30 people were injured in the crash.

Bus bursts into flames after collision in Germany

Forty-eight people were traveling on the bus when it slammed into a semitrailer near the Bavarian town of Münchberg and burst into flames early Monday, police said. Up to 18 people were first said to be missing, then confirmed dead.

"It's clear now that all 18 of the missing people on the bus died in the accident," police said on Twitter.

Read more: Road accidents in Germany on the rise

They said the ages of those on the bus ranged from 41 to 81 and that most were from the eastern German state of Saxony.

"Unfortunately numerous people...lost their lives in this burning bus," Seibert told a news conference. "Our thoughts go to the victims and their family members, as well as to the injured. We hope that those who have been rescued will recover from their injuries."

Read more: How safe is bus travel in Europe?

Forensic specialists were sent to the site to remove and identify the bodies from the charred vehicle. Federal Transport Minister Alexander Dobrindt also examined the crash site. 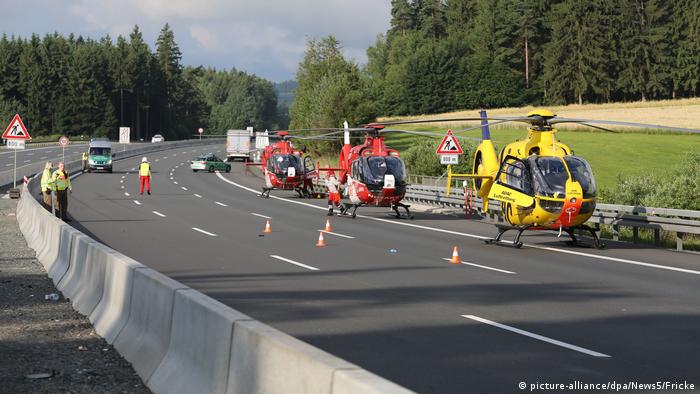 Local mayor: 'This is just catastrophic'

Footage broadcast on German television showed a burnt-out bus wreck on the A9 highway with helicopters, ambulances, fire brigade trucks and 200 rescue workers on the scene. Police said the roadway's southbound lanes would remain closed for the rest of the day.

The mayor of the nearby town of Stammbach, Karl Philipp Ehrler, told the German Press Agency it was the worst accident the community had experienced.

"It's madness. This is just catastrophic," he said.

The coach went up in flames after it plowed into the truck at the end of a traffic jam shortly after 7 a.m. local time (0500 UTC). Police said the truck driver was uninjured, but that the driver at the wheel of the bus during the crash was among the dead..

According to the Bild newspaper, the tour group on the bus was heading for Nuremberg.

The A9 motorway connects several popular holiday spots in the southern German region, which is known for its castles and hot spas.

The crash, at the start of the Europe's summer holiday season, follows a fatal accident in January in which a Hungarian bus traveling through Italy burst into flames, killing 16 students. In October 2015, 43 people died when a coach collided with a truck and caught fire near Puisseguin in southwest France - the country's worst road accident in three decades.

As the cold snap continues its hold over Germany, people in many parts of the country blame icy roads and travel havoc on incompetent state and municipal planning. (29.12.2010)

A Tesla electric car, reportedly on autopilot, has crashed into a tourist bus on a highway in northern Germany, say police. It once again draws focus to the safety issues involved in self-driving vehicles. (29.09.2016)

Traffic analytics firm Inrix has calculated how much time drivers spend stuck in traffic during peak travel times in 1,064 cities in 38 countries worldwide. Here are some of the most congested: (20.02.2017)

Bus bursts into flames after collision in Germany