German bishop quits over abuse report | Germany| News and in-depth reporting from Berlin and beyond | DW | 17.07.2010

The world's first female Protestant bishop Maria Jepsen has resigned in Hamburg following a report she had allowed a pastor accused of sexual abuse in her diocese continued contact with youngsters. 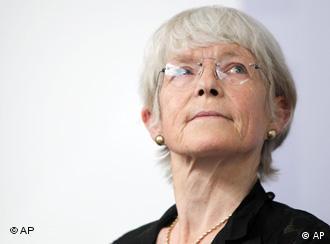 The cases of abuse date back to the 1980s when a pastor in the town of Ahrensburg reportedly sexually abused as many as 20 children.

Jepsen said she had only become aware of cases in March of this year when she received a letter from one of the victims. But a recent report in the German news magazine Der Spiegel and the daily Hamburger Abendblatt indicated Jepsen knew of the priest's suspected behavior in 1999.

"My credibility has been contested," Jepsen told reporters in Hamburg. "For that reason, I do not see myself in a position to continue to spread God's word as I had promised."

"I expect that the... cases in Ahrensburg and elsewhere will be swiftly investigated and that the truth will come to light," Jepsen said.

"Jepsen has always shown a clear understanding that the victims' needs come first," he said. "It shows that the Protestants are ready to accept responsibility for what has happened without trying to protect themselves."

"I know that she is a woman of real integrity and that she has fought for certain things, in particular for the rights of woman, both within the church and outside it," said Simonis.

The 65-year-old Jepsen became the world's first female Protestant bishop in 1992. She is the third bishop to resign in Germany in recent months. Catholic Bishop Walter Mixa resigned over a sex abuse scandal, and former head of the Protestant Church in Germany, Margot Kaesmann, resigned after she was caught by police drunk driving.

The head of Germany's Protestant Church has resigned from her post as the top-ranking Lutheran bishop. Police had caught her driving drunk. (24.02.2010)

A cache of secret documents alleging alcoholism and sexual abuse is the latest element to surface in the battle over the fate of conservative German Bishop Walter Mixa. (21.06.2010)

Pope Benedict XVI on Saturday accepted the resignation of German bishop Walter Mixa who has been accused of hitting children. It's the latest in a string of Catholic officials forced to quit over an abuse scandal. (08.05.2010)