A cache of secret documents alleging alcoholism and sexual abuse is the latest element to surface in the battle over the fate of conservative German Bishop Walter Mixa. 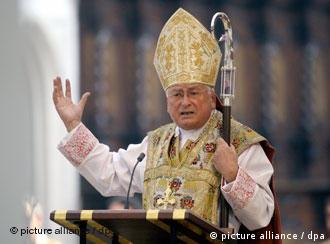 Now, even the flock is telling its leader it is time to go

The Vatican has yet to comment on the secret file that was reportedly uncovered dealing with the disgraced Augsburg bishop, Walter Mixa. Mixa tendered his resignation in April, amid allegations of financial irregularities and after he admitted having slapped and beaten children in an orphanage in his parish, near Munich, in the late 1970s.

The pope accepted his resignation two weeks later, in early May.

Now, Mixa has moved back into the bishop's mansion, and says he wants that decision reversed. He claims the pope was pressured to accept his resignation due to unproven allegations of sexual abuse.

The allegations are said to be contained in a secret dossier held by the Vatican, by which Pope Benedict XVI was influenced in his decision to accept Mixa's resignation.

The documents are said to contain statements from Mixa's co-workers claiming the bishop suffered from a serious alcohol problem, and that he sexually abused and/or harassed his subordinates.

According to the German Sueddeutsche Zeitung newspaper the files - which cover several dozen pages - cite a co-worker who claims Mixa regularly drank wine and hard liquor throughout the day: he was the type of drinker who needed to maintain a certain blood-alcohol level in order to function, the report said. 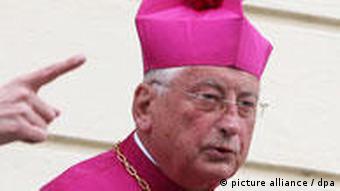 The accusations against Bishop Mixa have been increasingly serious

In addition, comments in the files repeatedly referred to the Bishop's getting "out of touch with reality."

The dossier was reported on by major German news outlets on Monday. The Sueddeutsche Zeitung and the Frankfurter Allgemeinen Sonntagszeitung both said these files were a main reason the pope had agreed to Mixa's resignation.

Proxy fight between conservatives and liberals?

Late last week, however, the bishop charged his opponents within the church - particularly two of Germany's leading archbishops, Reinhard Marx and Robert Zollitsch - with having used these charges to force him out of office.

Representatives of the German Catholic Church have denied the allegations. On Monday Helmut Mangold, the chairman of the Augsburg Diocesan Council, which represents 1.3 million Bavarian Catholics, urged the ex-Bishop to leave the diocese as quickly as possible.

"It is the only reasonable way to bring some calm back into this diocese," Mangold told dpa news agency.

Mixa, speaking to the Die Welt newspaper, claimed the rumor of sexual abuse was "baseless, as the Augsburg prosecutor's office confirmed after looking into it."

The ex-bishop said he felt "tricked" by Marx and Zollitsch, who he said added the sexual abuse claim as a "trump card" to other claims before the pope.

Germany's Catholic Church is still reeling from a series of sexual-abuse scandals in recent months. Some furious Church liberals have urged Mixa to remain silent, while others have accused him of having lost touch with reality.

Indeed, the increasingly bad-tempered battle is seen as being a sort of proxy war between the liberal and conservative wings struggling for the upper hand in the church.

Meeting with the pope is planned

Mixa intends to meet with the pope in July, but the Vatican has already said that the meeting will change nothing in its acceptance of the Bishop's resignation.

"The pope has based his decision on Walter Mixa's resignation on the basis of information. Where he obtained the information is secondary," Vatican spokesman Padre Fedrico Lombardi told news agencies on Monday.

"It is clear that the press is speculating but we don't want to add to the speculation," he said.

Prosecutors said they did not find proof that Walter Mixa sexually abused children at an orphanage he ran in the 1970s. But they did find corroboration for accusations of physical abuse and misuse of funds. (15.05.2010)

A round-table forum aimed at preventing child abuse convened for the first time on Friday in Berlin, chaired by government commissioner Christine Bergmann. The forum intends to break the silence on the issue, she said. (23.04.2010)

German Bishop Walter Mixa has resigned amid charges that he physically abused teenagers at an orphanage. Mixa wrote to the pope after the head of German bishops' conference called on him to take a leave of absence. (22.04.2010)