German Bank Robber Gets Bum Rap | News and current affairs from Germany and around the world | DW | 23.09.2008

An alleged German bank robber took all the necessary precautions when preparing to execute her latest heist. However, she didn't count on one observant man's fascination with her backside. 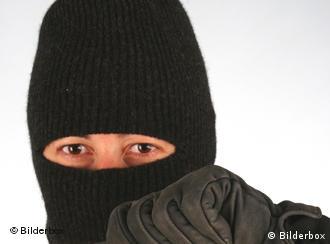 The ski mask certainly wasn't what gave the thief away

Bank robbers tend to go to great lengths to disguise their identity. Masks are usually worn; balaclavas tend to give the violent thief a business-like aura while the clown look mixes fun and disconcertingly evil aspects to great effect. Usually, the face wear is accompanied by non-descript clothing, with slimming black the color of choice.

However, robbers will be unhappy to hear that not even the most heavily disguised criminal can be 100 percent sure of getting away with their swag. An alleged German robber has been identified and caught -- not because her face was caught on camera or a distinctive t-shirt she was wearing had been seen again, but because an eagle-eyed witness recognized her large behind.

The 26-year old female robber originally got away with around 15,000 euros ($22,100) from a raid at a bank in the western German town of Norf but when she returned to hit the same bank again, the witness saw a "very large" backside and a pair of "powerful thighs" which he thought he'd seen before, standing in front of him in the queue.

"(The witness) called the police and they arrested her and found her ski mask and hand gun in her jacket. He said he recognized her bottom straight away -- he'd never forget something that big," one bank worker told reporters.

The robber now faces up to 10 years in jail on robbery and firearms charges while the 61-year-old witness has landed a 5000-euro reward.

Germany's bad service in shops and administrative offices may be the bane of consumers, but it was a boon for crime prevention in one case. A bank robber who met the icy attitude of a teller turned tail and fled. (06.11.2007)

In order to exude more masculinity at the age when years of beer-drinking turn six-pack into bundles of soft regret, men usually go for fast cars and younger girlfriends. Some, however, become raisin thieves. (15.09.2006)

A German security guard who made off with a substantial sum destined for a bank was eventually caught following a 10-day manhunt by Interpol agents -- after calling home to his mom from a Croatian beach resort. (26.10.2005)