German Authorities Slam ″The God Delusion″ for Kids | Germany | News and in-depth reporting from Berlin and beyond | DW | 31.01.2008

The German Family Ministry is pushing to have a book it says slurs Judaism, Christianity and Islam labeled dangerous for children. The book's publisher says kids have a right to enlightenment. 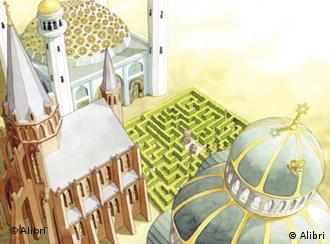 The German Family Ministry is pushing for the children's book "How Do I Get to God, Asked the Small Piglet," by written by Michael Schmidt-Salomon and illustrated by Helge Nyncke, to be included on a list of literature considered dangerous for young people.

"The three large religions of the world, Christianity, Islam and Judaism, are slurred in the book," the ministry wrote in a December memo. "The distinctive characteristics of each religion are made ridiculous."

The search for God 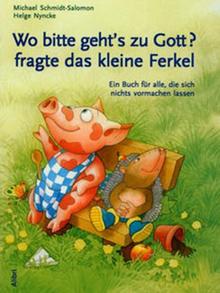 "The God Delusion" for kids?

The book tells the story of a piglet and a hedgehog, who discover a poster attached to their house that says: "If you do not know God, you are missing something!"

This frightens them because they had never suspected at all that anything was missing in their lives. Thus they set out to look for "God." Along the way they encounter a rabbi, a bishop and a mufti who are portrayed as insane, violent and continually at each other's throats.

The rabbi is drawn in the same way as the caricatures from the propaganda of 1930's Germany; corkscrew curls, fanatical lights in his eyes, a set of predator's flashing teeth and hands like claws. He reacts to the animals by flying into a rage, yelling at them that God had set out to destroy all life on Earth at the time of Noah and chases them away.

The mufti fares little better. While he greets both animals at first as a quiet man and invites them into his mosque, he soon changes into a ranting fanatic. He assembles a baying Islamic mob and holds the animals up in a clenched fist while condemning them to everlasting damnation through bared teeth and an unruly-looking beard.

The insinuation here is that all visitors to mosques are extremists and every imam who appears reasonable is, in truth, nevertheless, a preacher of hate. 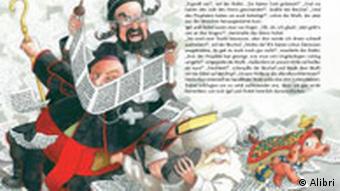 The three religious leaders are shown as being violent, insane and intolerant

The bishop, a pale fat man with a clearly insinuated predilection for child abuse, makes up the unholy trinity which eventually convinces piglet and hedgehog, after they have survived the long search in the maze of religions, that nothing of any importance has been missing from their lives.

"I think that God doesn't even exist," the hedgehog says at the end of the book. "And if He does, than he definitely doesn't live in [a synagogue, cathedral or mosque]."

Published in October 2007, the 20-page book's publisher, Alibri, said it was aware it was risking a political battle when it published the book.

"It's clear to me that putting a critique of religion in children's bedrooms is a hot political topic," Alibri head Gunnar Schedel said. 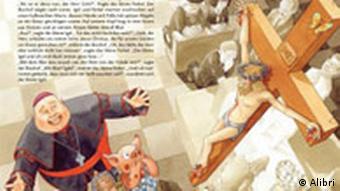 The bishop comes with obvious connotations

Calling the ministry's accusations an "attack on freedom of expression," the publisher said the book answers the question of whether a nonreligious child is missing part of life "from the perspective of secular humanism."

Schedel added that the book is intended for nonreligious parents looking to provide their children with a critical view of religion.

"All three religions are treated equally in the book," he said. "No one is negatively singled out."

Author Schmidt-Salomon said the book was "desperately needed considering the enormous mass of religious children's stories." He added that he the book offers children and their parents the opportunity to read about agnostic beliefs if they choose.

"Children also have a right to enlightenment," he wrote on a Web site set up dedicated to the book. "They should not be left defenseless to the scientifically untenable and ethically problematic stories of religion."

The German department responsible for reviewing children's literature is scheduled to discuss whether the book presents a danger to children's upbringing in a March meeting.

Should children be able to read about all the different opinions about religion? Please include your full name and country with any reply.