Council of Europe: Keep Creationism Out of Science Classes | Europe | News and current affairs from around the continent | DW | 05.10.2007

Europe's biggest parliamentary body has urged its 47 member states to "firmly oppose" the teaching of creationism as a scientific discipline in schools. Not all think it's the best way to deal with the issue. 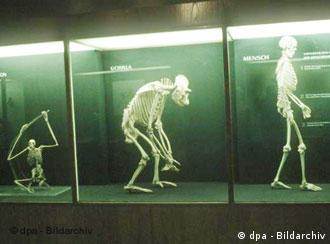 Evolution, not creationism, should be taught in European science classes, the resolution says

The resolution, entitled "The dangers of creationism in education," was adopted in a vote on Thursday, Oct. 4, during a plenary session of the Council of Europe Parliamentary Assembly (PACE). While 48 members approved the document, 25 voted against it.

Based on a report on attempts to have creationism taught in science classes in Europe, the resolution's "aim is to warn against certain tendencies to pass off a belief as science … the Parliamentary Assembly is worried about the possible ill-effect of the spread of creationist ideas within our education systems and about the consequences for our democracies. If we are not careful, creationism could become a threat to human rights."

The document also urges member states to "defend and promote scientific knowledge" in schools and oppose attempts to place creationism on equal footing with Charles Darwin's theory of evolution, the basis of modern biology. 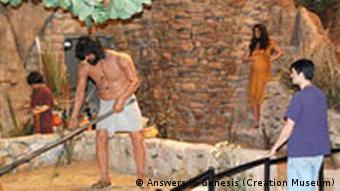 The first "Creation Museum" opened in the US in 2007

While creationism, which says that God created the world in six days, has been mainly propagated by Christians in the United States, the PACE report was initiated after a Turkish Muslim publishing group sent an Islamic creationist book to schools in several countries, Reuters news service reported.

In Germany, the culture minister of the central state of Hesse, Karin Wolff, a member of the Christian Democratic Union (CDU) of Chancellor Angela Merkel, recently made headlines when she suggested that the biblical concept of creation should be discussed during biology classes. She had, however, warned that the text should not be taken literally, according to reports. 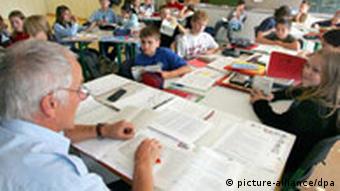 Should students instead discuss creation in science class?

The PACE report had already been up for a vote earlier this year, but was sent back for reworking after several conservative parliamentarians had complained about it.

German CDU parliamentarian Axel Fischer, who voted against the resolution on Thursday, said that he felt that the resolution had been sloppy and included a "negative undertone against churches."

"I missed a justification for why creationism is a threat to human rights," he told DW-WORLD.DE, adding that he thought it was wrong to ban certain things from schools from the outset.

"I'd rather discuss the strengths and weaknesses of something and leave it up to people to decide what they believe," said Fischer, a mechanical engineer by trade.

Supporters of the resolution on the other hand said that it was not meant as an attack on religious beliefs.

"There are different views of the creation of the world and we respect that," Anne Brasseur, a liberal parliamentarian from Luxembourg, who presented the report, recently told Reuters. "The message we wanted to send was to avoid creationism passing itself off as science and being taught as science. That's where the danger lies."

The resolution is not binding for member states, but PACE decisions carry some weight, as the body is made up of parliamentarians from the national assemblies of member states.

After recent comments by a state education minister, some German biologists have expressed concern over an increase in the influence of creationists in the country. (02.11.2006)

While a US court this week ruled that evolution must be taught as a fact in Pennsylvania schools, a small group in Germany is trying to advocate alternatives. It believes that an "intelligent designer" created life. (21.12.2005)

Back to the Dinosaurs in Berlin

No need to make a run for it when a giant reptile looks as if it's about to start feasting on your leg. The computer-generated creature is part of an exhibit opening Friday at the Museum of Natural History in Berlin. (13.07.2007)

Do you think PACE members did the right thing by adopting the resolution? Please include your name and country in your reply.