German police have arrested three people with alleged ties to a Syrian radical group, according to the federal prosecutor's office. Authorities conducted simultaneous raids in three cities across the country. 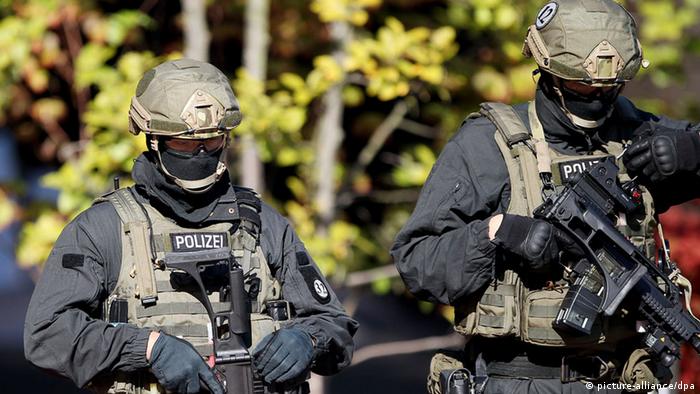 More than 100 members of Germany's elite GSG 9 police squad, as well as federal and state police, simultaneously raided 10 apartments in the capital Berlin, and the western cities of Bonn and Frankfurt on Monday. There was one arrest in each city.

Authorities arrested a 35-year-old German and a 26-year-old Turk who are believed to have traveled to Syria last year to join the Islamic State of Iraq and the Levant (ISIL), a militant group German authorities consider to be a foreign terrorist organization.

The third person, a 27-year-old woman with dual German-Polish citizenship, was arrested for allegedly giving the group 4,800 euros ($6,600).

The three face possible charges of membership or providing support for a terrorist group.

Police also searched the homes of five other suspects who they believe belong to or support the ISIL.

"Today's actions show that violent conflicts like the one in Syria have direct impacts on us in Germany," federal prosecutor Harald Range said in a statement.

"We must decisively fight this phenomenon with all the means of the criminal justice system, with an eye to the possible dangers that radicalized people returning from Syria can pose to the population in Germany," he added.

ISIL has been fighting opposition rebel forces in Syria since January. Hundreds of Europeans are believed to have joined Syria's bloody civil war since it began in 2011.

Accounting for the atrocities of war in Syria

Although the fighting in Syria rages on, accountability experts say now is the time to prepare the population of the war-torn state for the complexities of serving justice on a nationwide scale. (30.03.2014)