A short film that shows a man striking bizarre poses has been interpreted as a comical representation of behavior on the soccer field. Its producer thinks that there are some good reasons for this. Hattler is baffled by the behavior of soccer players

Although not originally created with soccer in mind, a short film called "Your Highness" by German video artist Max Hattler has taken on a new dimension in light of the 2010 FIFA World Cup. The video features a scantily-dressed man in a field striking a series of poses that seem to represent an aggressive, competitive, and hyper-masculine mindset.

The German website ZEIT ONLINE published the video with the soundtrack of a soccer match in the background, giving it a whole new meaning. In an interview with Deutsche Welle, Hattler agrees that this interpretation is easy to justify.

Click on the link below to watch Max Hattler's video "Your Highness."

Deutsche Welle: Could you explain the concept behind this video?

Max Hattler: It's all in the interpretation. The video has existed for a while, but now it is seen from the perspective of soccer.

So were you thinking about soccer when you made the film?

Not initially. It was about masculine behavior - the idea of an anti-superhero, Modern Man - and his inner struggles, expressed through serious ridiculousness. But I found that the soccer angle worked very well.

When was it originally filmed?

It was filmed in 2006, but the soundtrack is completely new. I think it makes the work stronger.

In another interview you said you're like an anthropologist who likes to analyze soccer. Can you explain your interpretation of the current World Cup atmosphere in Germany?

I don't want to be negative, but I always find the whole thing rather strange. Soccer is one thing, but the World Cup is something else because it takes on even more of a mass dynamic. During the World Cup period in 2006, when Germany was the host country, I returned to Germany from England and was stunned to see everyone waving their German flags and all the newspapers reporting how great it was that Germans could now finally show their national pride again. This time around, it has become even worse - police cars sporting German flags, etc. I find it rather unpleasant.

That interview attracted some scathing comments.

I was shocked and amused when I had a look at them. For years now I've been making art and political statements to some degree, but nothing I've done before has evoked such an immediate and divided reaction. As you saw, some people really personally attacked me, as they felt directly insulted in their masculinity, their group mentality and their understanding of the game. That's okay, but I was pretty shocked. 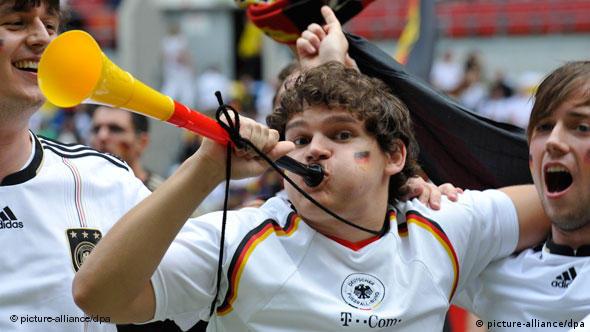 Why do you think people get so passionate about this topic?

I think it's a method of identification - in a volatile world of unstable identities, soccer fandom provides a sense of safety, a way of anchoring one's masculinity and core values to the simple rules and rituals of the game. So then when someone comes and says, "I don't get this," it's like a sin against the Church of Soccer.

The phrase "the stupidity of soccer" also appears in the comments. Is soccer something stupid?

No, I wouldn't say that. One person in the comments formulated it really nicely: "How convenient, that masculine energy is currently tied to these forms of expression." So we could also see it this way: Without soccer, there would be chaos in the streets every day [laughs].

The actor in the video is not you. What instructions did you give him and can you explain how this video was made?

I always approach my work very freely - I take an idea and let it grow organically. I have an animation background, and I don't like working with storyboards and formulated plots, but rather with moods and atmospheres - I'm very interested in abstraction and abstractedness as a way of reflecting upon the taken-for-granted. In this case we were taking cues from different sports, eurhythmy, tai-chi and meditation. Some ideas came from me, some from the actor, Johannes Ender, and the whole thing just developed.

This spontaneous, rather open method allows for many interpretations.

Of course. As I said, this is not a video against soccer, but it plays on the concept of gender and masculinity, and it's quite absurd to a large extent.

No visit to a soccer stadium in South Africa is complete without a vuvuzela. The long, thin plastic horn is a popular fan article and could dominate audio coverage at the upcoming World Cup games. (05.06.2010)

Professional athletes are under enormous pressure, and for some players the burden can be too much. In soccer, more than other sports, the taboo on seeking help is a hard one to break. Could change be underway? (09.03.2010)

Robert Enke's suicide has prompted many people to ask whether more could have been done to help. But the complex nature of the soccer community, and the problems that go with it, make finding answers much more difficult. (12.11.2009)

Watch more of Max Hattler's films on his website