German Chancellor Angela Merkel and Foreign Minister Guido Westerwelle are among those who have spoken out against Tehran's crackdown on anti-government protesters. 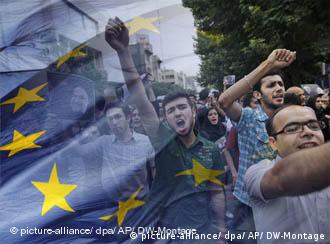 Europe calls on Iran to end its crackdown

In a strong statement to the press on Monday, German Chancellor Angela Merkel called the actions of Iran's state security services “unacceptable.”

She called on them to “avoid any further escalation of the violence and to pursue political dialogue to peacefully settle internally disputed matters,” and also to respect their commitment to the International Pact on Civil and Political Rights, which guarantees the right to peaceful protest.

At least eight people were killed in street clashes in Tehran when police and Basij militia members confronted protest marchers who were attempting to gather at a number of central squares. Sunday's protests took place on Ashura, a Shiite Islamic holy day devoted to honoring martyrs, often through street marches.

According to opposition sources, security forces used tear gas and live ammunition to try to get the marchers to disperse.

German Foreign Minister Guido Westerwelle criticized Iran's tactics as “brutal,” and said that the international community “would be watching, not looking away.”

A spokesman for the French foreign ministry, Bernard Valero, said his country again expressed “deep concern,” and “condemns the arbitrary arrests and violence carried out against ordinary protesters.”

He added that intensification of repression “would lead nowhere.”

The Italian foreign ministry, meanwhile, warned the Islamic republic that "safeguarding human lives is a fundamental value which must be defended everywhere and in every circumstance."

Eight killed and hundreds detained in fresh clashes in Tehran

Eight people have been killed and hundreds arrested in the Iranian capital after clashes between police and demonstrators. The nephew of opposition leader Mir Hossein Mousavi is reported to be among the dead. (28.12.2009)