Eight killed and hundreds detained in fresh clashes in Tehran | World| Breaking news and perspectives from around the globe | DW | 28.12.2009

Eight killed and hundreds detained in fresh clashes in Tehran

Eight people have been killed and hundreds arrested in the Iranian capital after clashes between police and demonstrators. The nephew of opposition leader Mir Hossein Mousavi is reported to be among the dead. 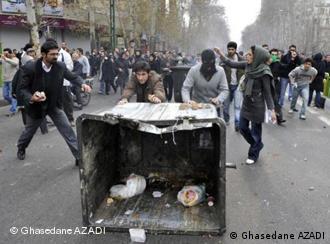 Iranian state TV has reported eight deaths from the protests

Iranian state television has reported that eight people were killed in violent clashes between police and opposition supporters during rituals commemorating one of Shiite Islam's leading figures on Sunday.

The deaths were the first such fatalities in the country since violent street protests erupted there following the disputed re-election of President Mahmoud Ahmadinejad in June, which saw as many as 70 people die.

According to the Web site Kaleme, an adviser to Mousavi confirmed the death of Mousavi's nephew in the clashes. The Web site quoted the adviser as saying, "I express my regrets and deep condolences over the martyrdom of your nephew Ali Habibi Mousavi on Sunday." 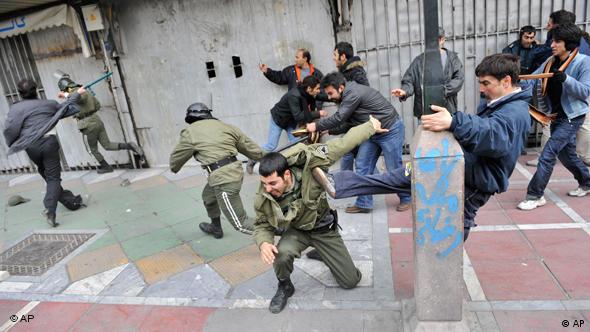 Among EU nations, France has been the first to criticize the Iranian government's response. "France condemns the arbitrary arrests and the violent actions committed against simple protesters who came to defend their right to freedom of expression and their desire for democracy," the French Foreign Ministry said in a statement.

"What has happened to this religious system that it orders the killing of innocent people during the holy day of Ashura?" asked Karoubi, who came fourth in the June election, in a statement posted on the Jaras Web site.

Exiled Iranian opposition figure Mehran Barati, who now resides in Germany, said continuing public opposition to the Iranian government would increasingly lead to "cracks in the ruling apparatus," and would galvanize support for Mir Hossein Mousavi, who he referred to as the "hope bearer" for anti-Ahmadinejad forces. 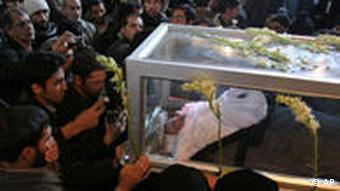 Tensions have risen since the death of dissident cleric Montazeri

Tens of thousands of demonstrators are said to be on the streets of Tehran with clashes also in other cities, among them Shiraz, Isfahan and Najafabad.

On Saturday, riot police used tear gas and shot into the air to disperse crowds of protesters in the city. Tensions have risen in Iran following the death a week ago of the dissident cleric Grand Ayatollah Hossein Ali Montazeri at the age of 87.

The past months have seen increasingly violent clashes between security forces and opposition supporters after a disputed June poll led to Ahmadinejad’s re-election.