The heads of Germany's and Austria's nationalist parties have met to boost cooperation on their Euroskeptic political platforms. Some members of the Alternative for Germany condemned the meeting as a photo-op, however. 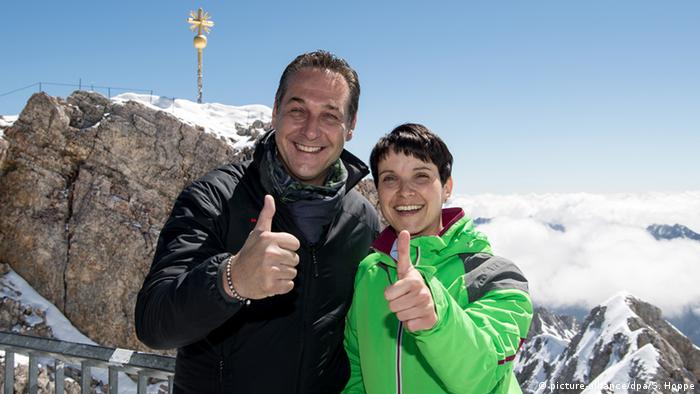 Right-wing leaders from Germany and Austria met on the border of their two countries on Friday for high-level talks on future cooperation. Frauke Petry of the Alternative for Germany (AfD) and Heinz-Christian Strache of the Freedom Party of Austria (FPÖ) were all smiles over glasses of beer at the top of Germany's highest mountain, the Zugspitze.

"We want to work together to advance to new political heights," said Strache, whose party narrowly lost its recent bid for the Austrian presidency in an election that raised concerns about the rise of conservative political populism in western Europe.

The Austrian lawmaker promised to help Petry, so that "also in Germany, the party of freedom can grow."

Neither party is a stranger to controversy. Both promote nationalist agendas that see migration and refugees as problematic and have adopted party platforms describing Islam as having no place in Europe.

According to media reports, however, Petry should be paying more attention to rumblings within her own party than courting the leaders of others. Only a year after she ascended to the office of party chair after founder Bernd Lucke was ousted, her enemies within the AfD are calling on Petry to step down next.

In light of the meeting with Strache, managing board members of the party Georg
Pazderski and Alice Weidel circulated a letter in which they support the meeting with the FPÖ on principle, but condemned the photo-op nature of the summit.

"Individual actions of self-promotion that come at the expense of strong federal leadership and the resulting lack of coordination and information must be prevented and eliminated," they wrote.

Leading figures from German football have slammed comments made by the deputy of the populist party Alternative for Germany about national team player Jerome Boateng. The party has a radical anti-immigration stance. (29.05.2016)

The head of the AfD party is being investigated over allegations she lied under oath to the Saxon state parliament. The case revolves around statements she gave concerning loans made to the party. (25.05.2016)