Georgia and Moldova have penned agreements which will see to the two countries move closer to the European Union. However the EU failed in its attempts to sign a similar accord with Ukraine. 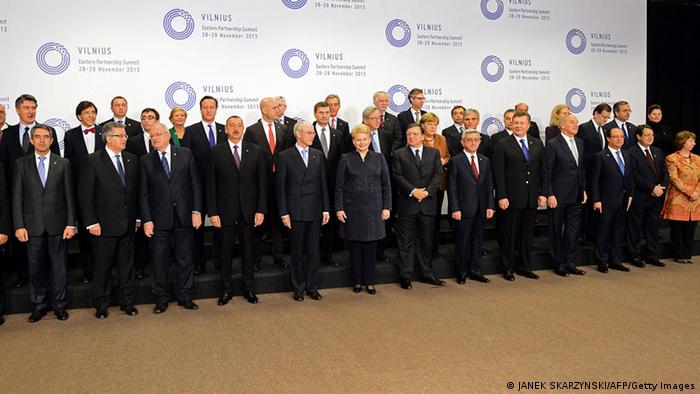 The leaders of the two countries initialled association and free trade agreements with the European Union during summit talks with EU leaders in the Lithuanian capital, Vilnius on Friday.

The agreements are meant to strengthen Georgia and Moldovas' political and trade ties with the 28-nation EU.

"(The association agreement) represents a clear way forward for our relations that will surely bring my country one day into the EU," Moldovan Prime Minister Iurie Leanca told reporters at the initialing ceremony.

"Moldova ... is a European country which wants to have the same common skies and belong to the same family," Leanca said.

"We Georgians know that we are Europeans," Margvelashvili said. "But for historical and geopolitical reasons, we were not able to take part in the initial phases of European integration."

German Chancellor Angela Merkel praised the two countries for taking what she described as a "a very brave step," in view of the diplomatic pressure both had faced "through trade restrictions," mainly from regional superpower Russia.

EU conference host, Lithuanian President Dalia Grybauskaite warned that both countries that they had a lot of "very hard work" ahead of them before their EU association deals could be finalized and become an "irreversible reality."

The EU Eastern Partnership Summit in Vilnius could have been a turning point for Eastern Europe. But Moscow's pressure on Ukraine has raised questions about the future ties between the six countries and the EU. (28.11.2013)

While EU leaders hailed the accords with Georgia and Moldova, they failed to convince Ukraine to agree to a similar deal. Ukrainian President Viktor Yanukovych said he wasn't satisfied with what the EU had offered.

"Unfortunately, Ukraine in the last while has turned out to be alone in dealing with serious financial and economic problems," Yanukovych said in a statement posted on his web site.

"We need our European colleagues to take decisive steps toward Ukraine when it comes to the development and realisation of a programme of financial and economic aid," he said, adding that he hoped to sign an association agreement with the bloc in "the near future."

Chancellor Merkel expressed disappointment at Yanukovych's decision, warning that after Friday's setback, it could take some time for the two sides to reach an agreement.

"We haven't achieved that, which we set out to achieve with Ukraine," the chancellor said.

"You can't, as the Ukrainian president would like it, ... ask that we pay for Ukraine to enter this association agreement. We don't pay," Hollande said.