'Gaza Surf Club': How young Palestinians find a break in times of war

In the occupied Gaza Strip, young Palestinians get a taste of the freedom they lack through surf. DW met German director Philip Gnadt and producer Mickey Yamine to discuss their documentary "Gaza Surf Club." 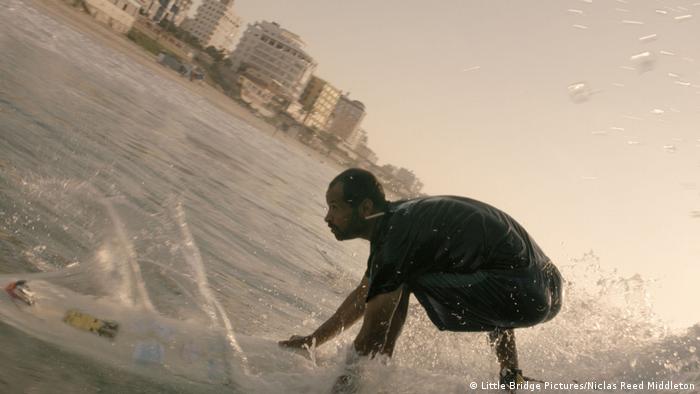 DW: How did you get the idea to make a film about Gaza and the surfers' scene over there?

Philip Gnadt: I'm not a surfer myself. I've done some bodyboarding on the Atlantic coast, so I can somehow imagine how hard it is to catch a wave.

My real interest in the subject came from that region, more precisely through a friend I met in Stuttgart who was born and grew up in Gaza. He described the Gaza issue from a different perspective.

We're all familiar with the term Gaza that frequently comes up in the news. Everybody has the same diffuse picture from conflicts, bombed-out houses and masked guerrilla fighters.

My friend told me about how life can be between wars. I then developed an interest in that, I did some reading and research. Quite soon you get depressed because nobody has a real solution. 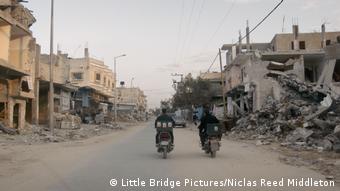 Driving through a city of debris: Scene from "Gaza Surf Club"

But then a change did occur…

I came across an article about surfers in Gaza, and immediately I thought: Oh wow, finally something different for a change! Hossam, my friend, had never heard of them either. Surfing is a sport that stands for personal freedom, in Gaza, one of the most isolated lands of the world. That image was super strong.

That's when I thought that I should do something about that. I started doing research and contacted those guys.

I had to tackle a big problem, though: I don't speak Arabic. Looking for someone who could help me out with the language and knowledge about the culture, I met Mickey, who grew up in Cairo. He also liked the topic immediately. From then on, we developed it together.

What was your strongest anent impression? What surprised you the most?

It might sound a bit cynical, but something that generally impressed me about people there - not only the surfers, but also average people - was their positive thinking. 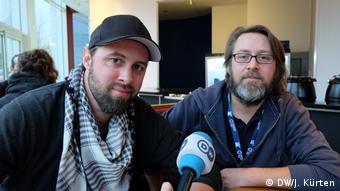 As Mickey comes from the region, he still has a different approach to the mentality of the people there. But to me, it was certainly unknown. As soon as I had passed the border I felt comfortable. I had imagined it would be frightening way, but I felt welcome there.

Of course, we looked quite exotic. We were running around at the beach, and children friendly approached us and asked us what we were doing there. That accompanied me over the next six weeks. That open behavior is perhaps related to a person's age. The older people are, the more disillusioned they are. At they turn 50, 60 or 70 years old, they no longer expect much to change. Young people have a different approach and haven't abandoned their hopes. A certain basic optimism is there which I didn't expect.

Were you able to talk openly about politics? How was the atmosphere at the set?

We tried to avoid forcing politics as our objective was to show a different aspect of Gaza. But as soon as you talk to people, politics are present. There's always the topic of Israel's isolating policies, which block people from moving freely. On the other hand, they're also suffering under the Hamas regime.

There were topics we couldn't address so easily - especially not when cameras and recorders were around. That was quite noticeable. People were careful. But nevertheless, it did work quite well as Mickey and my co-producer Stephanie Yamine both speak Arabic, so they did the interviews...

Mickey Yamine: The interviews went well because we were able to have real talks without having to depend on translators. Philip, the cameraman Niclas Reed Middleton, Stephanie and I would sit together in the evenings and discuss what happened during the day and what we should do the next day. We always talked about emotions and feelings, rather than about concrete questions. That's why we were able to have good talks and to look behind the scenes rather than to just listen to what people had in their repertoire, answers they would give to just about any journalist. So we were able to go a bit further, asking them about their dreams, and how they really perceive the situation. 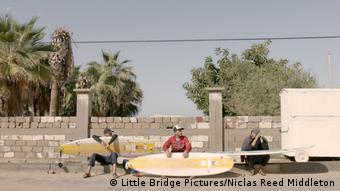 Waiting for the next wave

Of course, politics always plays a role. In Arabic countries, however, there's often not much room for politics because people cannot influence them. In European democracies, it's a different story because people do have a voice and are able to influence things. In Gaza, that's different. Hamas rules there. And many people we met are no Hamas fans. Nevertheless, they have to live with the status quo without being able to change it. Voicing your opinions, especially on political issues, can be very dangerous. We witnessed one or the other such situation... One of the older fishermen sort of flipped out cursing Hamas. The others' reactions were quite telling. They got worried that this scene could be included in the film. And they asked us to keep it out for security reasons.

It's interesting that there's also a female surfer in your film which adds yet another aspect to "Gaza Surf Club." How did that come about?

Philip Gnadt: During our research, we found out that there are also a few girls who want to learn surfing, or who have already learnt it. But prior to that, we had no possibility to contact these girls. Through Stephanie in our production team, we managed to gain her confidence. Stephanie also invested a lot of time to obtain the trust of the girl's father, so that he would let us enter their living room and the girl's room, and join her on the water with a surfboard. 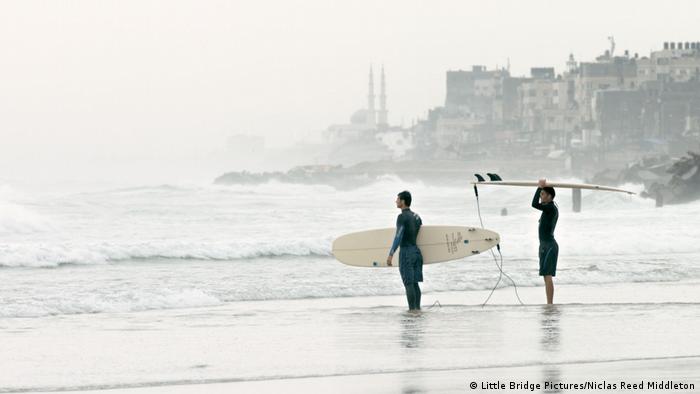 Surf allows people to taste something they don't find in Gaza: freedom

I presume it wasn't easy to film in Gaza. Was the project hampered by political problems?

Mickey Yamine: War broke out in Gaza at the moment we had planned to film there, which unfortunately quite often happens there.That's why we had to postpone filming and wait for the war to be over… 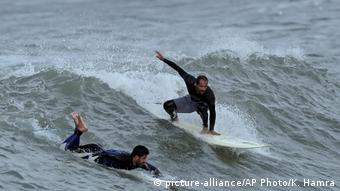 Philip Gnadt: Of course, it's a country you cannot simply enter without planning. It did take us some research and preparation to find out how we could enter Gaza. As Mickey grew up in Egypt he knew of the possibility to enter via Rafah and the Sinai. That's how we did it for our first research trip in 2013.

Two or three months later, political upheavals occurred in Egypt, and that completely changed relations between Egypt and Gaza, or more specifically Hamas. The border was more or less closed, smugglers' tunnels were blown up. The border only remained open for humanitarian purposes. The situation was very complicated.

We initially thought we could avoid going through Israel because we thought that topic might create potential controversy from an Israeli perspective. Finally, it was just more bureaucratic work but we entered Gaza from Erez in Israel a year later.

"Gaza Surf Club" opens in theaters in Germany on March 30.

A new Palestinian Museum opens in the West Bank on May 18 - albeit without an inaugural exhibition. The museum's chairman Omar al-Qattan tells DW how the institution aims to overcome boundaries to reach all Palestinians. (18.05.2016)

The Chinese artist and human rights activist received a permit to enter Gaza during a surprise visit to Israel, which he posted about on Instagram. Ai's tour is part of a documentary he is working on about refugees. (14.05.2016)