Gadhafi′s holy war call on Switzerland is ′unfortunate,′ EU says | Europe| News and current affairs from around the continent | DW | 26.02.2010

Libyan leader Moammar Gadhafi has called for a jihad, or holy war against Switzerland, saying the Alpine nation is a destroyer of mosques. The statement is the latest move in an ongoing diplomatic row. 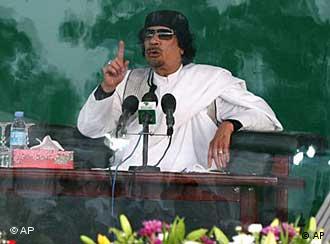 Gadhafi says his call for jihad is not terrorism

Gadhafi said that any Muslim who worked with Switzerland was against the Prophet Mohammad and the Koran, referring to a Swiss referendum verdict barring the construction of minarets, the spires that sit atop mosques.

"Let us fight against Switzerland, Zionism and foreign aggression," said Gadhafi, adding that "this is not terrorism," in contrast with the work of al-Qaida which he called a "kind of crime and a psychological disease."

"There is a big difference between terrorism and jihad, which is a right to armed struggle," he added.

The Swiss Foreign Ministry declined to comment on Gadhafi's remarks. But the spokesman for the European Union's chief of foreign affiars, Catherine Ashton, said he regretted the comments.

"If these reports are correct ... (they) come at an unfortunate moment when the European Union is working closely with Switzerland trying to reach a diplomatic solution" to a long runing battle between the two countries, Lutz Guellner told AFP news service. 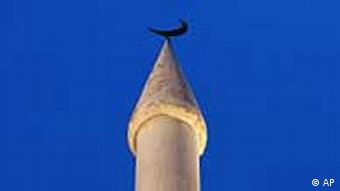 Switzerland banned the construction of minarets following a referendum

Gadhafi's call comes amid an ongoing visa row between Libya and Switzerland, with Bern refusing to lift a blacklist on around 200 top Libyan officials, including Gadhafi and his family.

Libya reacted by announcing that it would refuse to issue entry visas to most citizens of the European Union, although Switzerland is not a member of the 27-nation bloc. Switzerland is however among the 25 European countries in the border-free Schengen area.

Relations between Libya and Switzerland have been tense since 2008, when police in Geneva questioned one of Gadhafi's sons, Hannibal, and his wife, after a complaint from hotel staff that he had mistreated them.

That event led to Libya halting oil exports to Switzerland and withdrawing around $5 billion (3.7 billion euros) in assets from Swiss banks.

Enter one country that belongs to the 25 nation border free zone known as the Schengen area and you have access to all the others. This is just one ingredient of a complex dispute between the EU, Switzerland and Libya. (25.02.2010)

A Swiss decision to impose a travel ban on Libyan officials has prompted retaliation by Tripoli, which has imposed visa restrictions on all visitors from 25 mostly EU nations. The EU is undecided over how to respond. (17.02.2010)

The spat between Switzerland and Libya over tit-for-tat visa bans has now spread across Europe. The EU has joined the row on the Swiss side but some countries may jump ship if trade ties with Tripoli are threatened. (16.02.2010)