The spat between Switzerland and Libya over tit-for-tat visa bans has now spread across Europe. The EU has joined the row on the Swiss side but some countries may jump ship if trade ties with Tripoli are threatened. 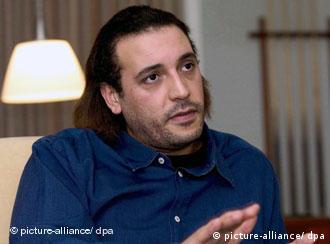 The high-profile arrest of Hannibal Ghadafi triggered a diplomatic crisis

On Sunday, Libya took the decision to stop issuing visas to citizens of the EU Schengen free-travel zone - of which non-EU member Switzerland is a signatory - escalating the spat caused by Switzerland's travel ban handed out to one of Libyan leader Moammar Gadhafi's sons.

The Libyan leader's son Hannibal and his spouse joined 186 other Libyan figures barred from visiting Switzerland after an incident in July 2008 when two hotel servants in Geneva complained Hannibal had mistreated them.

After Hannibal and his pregnant wife Aline were arrested in Geneva, Libya cut oil supplies to Switzerland and withdrew more than $5 billion (3.6 billlion euros) dollars in assets from Swiss banks.

Libya then prevented two Swiss businessmen from leaving the country, and subsequently tried them on visa violations.

The row flared up again in November last year when Switzerland asked the 25 Schengen signatories to restrict visas to Libyan passport holders. 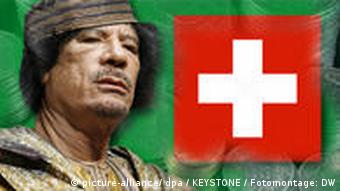 The Libyan leader took his cash out of Switzerland last year

Last week, a Tripoli appeals court reduced an earlier, 16-month prison sentence against Max Goldi, one of the two Swiss businessmen held in Libya on visa violations, after a court on February 7 acquitted fellow Swiss citizen Rachid al-Hamdani on the same charges.

But the row erupted again at the weekend with Libya taking steps which not only punish Swiss citizens but those from Switzerland's fellow Schengen area signatories.

Isabelle Werenfels, Senior Associate at the Middle East and Africa Research Division of the German Institute for International and Security Affairs, told Deutsche Welle that the whole affair, from the start in 2008 to this week's developments, has been traumatizing for the Swiss.

"The Libyans have made it very hard for the Swiss to get out of Libya and it has felt at times like they were hostages there," she said. "The airlines are still not allowed to fly out of Libya. Many people say that the Libya situation is actually at the heart of the Swiss attitude towards minarets and Muslims. It has been a very difficult time for Switzerland."

While the Libyan government has not publicly confirmed the reports, or given a public reason for the decision to ban entry to Schengen area citizens, the country's private daily newspaper Oea, which is close to Gadhafi's family, carried the story, quoting a "high-ranking" unidentified official who mentioned both the arrest of Hannibal Gadhafi and the Swiss ban on 188 Libyan citizens.

The Italian Foreign Ministry confirmed the ban on its Web site soon after. 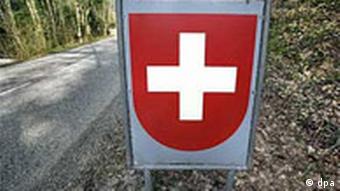 The Swiss banned 188 Libyans from crossing its borders

"Libyan authorities have confirmed the suspension of all types of visas for citizens of Schengen states. In addition, they have specified that citizens from Schengen states will be denied entry into Libya even if they are in possession of a visa, of whatever duration or type," a statement on its Web site read.

Werenfels said that predicting the effects of the visa ban would be difficult as Libya seemed to be employing an arbitrary ban at the moment. "Libya seems to be targeting high-level business people from Europe but we'll see how long that lasts," she said. "This would be damaging for Libya too. It remains to be seen if they ban anyone who works for the petrochemical industry, which is very important to Libya. Chances are, in two or three days, Gadhafi may find a way out of this while saving face."

Strong words from EU but little chance of strong action

Meanwhile, the European Commission declared the Libyan decision as being "unilateral and disproportionate."

"The Commission also regrets that travellers who legally obtained visas before the suspension measure were refused entry when arriving in Libya", said EU commissioner for Home Affairs, Cecilia Malmstrom.

She added that the commission is set to discuss the issue "before the end of the week" with Schengen countries, with a view to "consider the appropriate reaction."

Experts believe that the EU's show of unity towards Switzerland will evaporate when important trade and business relations are put at risk by any further escalation on an EU-wide scale.

"It is very important for the EU to speak with one voice. The EU should use the tools that it has," Sawsan Chebli, an associate fellow with the German Council on Foreign Relations, told Deutsche Welle. "The EU is Libya’s greatest trade and export partner. This is a leverage the EU could use. However, Italy and other EU member states with close relations with Libya in the past have shown that they are not interested to spoil their relations with Libya whatever Gadhafi’s action may be. That is not likely to change. And the problem is that Gadhafi knows that he is able to divide the EU."

Italians urge Swiss to resolve crisis and leave EU out 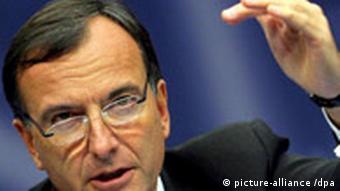 Frattini told Switzerland to leave Europe out its row with Libya

Chebli's opinion was reinforced by a statement from Italy which criticized Switzerland and urged the Swiss to sort out their differences with the North African country and its leadership.

Switzerland must "resolve this bi-lateral issue ... but not at the expense of everyone else," Italian Foreign Minister Franco Frattini said in a television interview, adding that he had stressed to Bern the "sensitivity" of the situation.

Sawsan Chebli believes that Italy's attitude highlights a disregard for European solidarity when business ties - which are strong between Italy and Libya - are concerned.

"The Italians care very little about the EU or other states when it comes to business relations," she said. "Solidarity is an unknown word in this regard. Frattini was very clear. He accused Switzerland of misusing the Schengen agreement to exert pressure on Gadhafi and said that Bern would take its members 'hostage'."

The European Union has hit out at a recent decision by Libya to stop giving visas to citizens from the border-free Schengen area. The move by Tripoli was believed to have been caused by a spat with Switzerland. (16.02.2010)

As African and Arab leaders travelled to Tripoli to join Libya's leader Moammar Gadhafi in marking four decades at the helm of his country, Europe was conspicuous through its lack of high-ranking representation. (02.09.2009)