Gabriel heads off to forge business links with Iran

German Vice Chancellor Sigmar Gabriel is in Iran on a three-day visit aimed at building trade relations. The trip follows an agreement to lift sanctions in return for Tehran reining back its nuclear program. 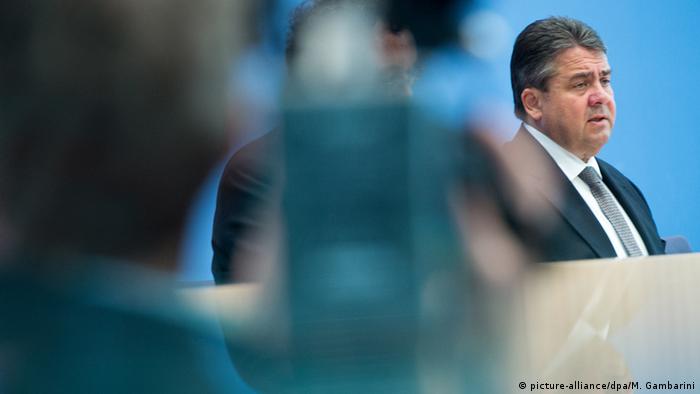 The German contingent visiting Iran from Sunday will include Gabriel, who in addition to being vice chancellor is also Germany's economy minister, and a "small delegation of industry and science representatives."

Gabriel said there was "great interest on the part of German industry in normalizing and strengthening economic relations with Iran" after the accord was signed.

Gabriel will be hoping to demonstrate some of that interest after more than 10 years of wrangling between Iran and the P5+1 countries, which includes Germany, the United States, Great Britain, China, Russia and France, over Tehran's nuclear program.

The accompaniment of a business delegation underlines the hopes of many German businesses in tapping into a multi-billion dollar market.

The German Federation of Industries believes exports to Iran could rise to more than 10 billion euros ($10.9 billion) in the medium-term, up from 2.4 billion euros in 2014.

President of the Association of German Chambers of Industry and Commerce Eric Schweitze told the German news agency DPA the nuclear agreement had been a clear turning point.

"German companies will now look to where they can forge links with old business contacts," he said.

While on a visit to China at the time of the Iran nuclear deal, Gabriel described the agreement as a "historic breakthrough."

Some 80 companies are believed to have subsidiaries in Iran, while about 1,000 have representatives there. The German VDMA engineering association has said the Iranian market offers some interesting opportunities, but also warned that it was no "El Dorado."

Several other countries are also eying up the fresh business opportunities that Iran offers. French Foreign Minister Laurent Fabius and Italian Economic Development Minister Federica Guidi also plan to visit Iran in the wake of the nuclear accord.

Iran's need to modernize industry, especially the oil sector, is seen as a particularly lucrative opportunity. Although Iran has the world's fourth-biggest oil reserves, production has fallen to less than three million barrels per day since 2012.

The agreement, reached on Tuesday, limits Iran's uranium enrichment capacity and other nuclear activity in exchange for billions of dollars' worth of relief from economic sanctions.