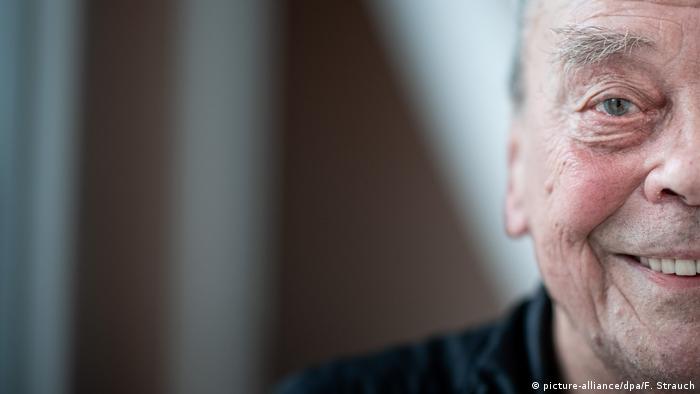 Nails. Thousands of completely normal nails, each one driven into a wooden board covered with linen. Some straight, some slanted, but none hammered in all the way. Günther Uecker has finished one of these nail reliefs every year for over half a century. They've made him famous in Germany and beyond.

Not just screens, but also sewing machines, chairs, record players and grand pianos have borne the brunt of those little shafts of steel. Hardly any other artist has equally dedicated his work to the craft of simple physical labor.

Hammering nails into backdrops and objects with force and precision, Günther Uecker creates reliefs that he terms "nail fields" and that achieve their full effect in the play of light and shadow. 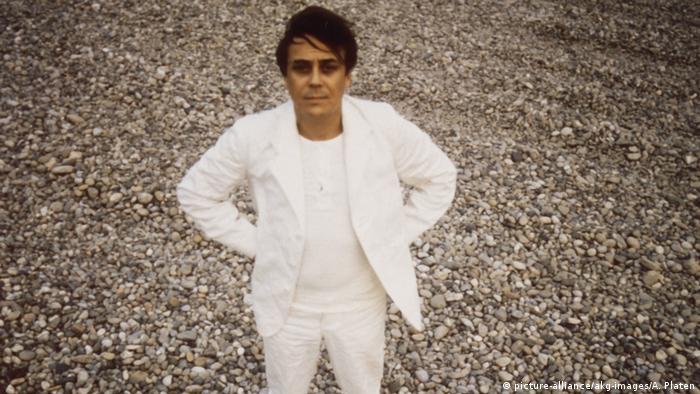 A life of war and peace

Born in the of town of Wendorf near Schwerin in northeastern Germany on March 13, 1930, Günther Uecker found himself boarding up doors and windows of his family house at age 15 in an effort to protect his mother and sister from the Russian army at war's end. It was the beginning of a life-long preoccupation with hammers and nails.

Post-World War II, he studied pictorial arts from 1949 until 1953 in Wismar, then in East Germany. In 1955 he fled to West Berlin and eventually found himself at the Art Academy in Düsseldorf, studying under Professor Otto Pankok from 1955-57.

During his studies he encountered the artists Heinz Mack and Otto Piene and joined their artists' conglomerate named ZERO in 1961. Together they represented a Zero Hour of art untouched by the horrors of the Second World War, marking a new beginning in art history. 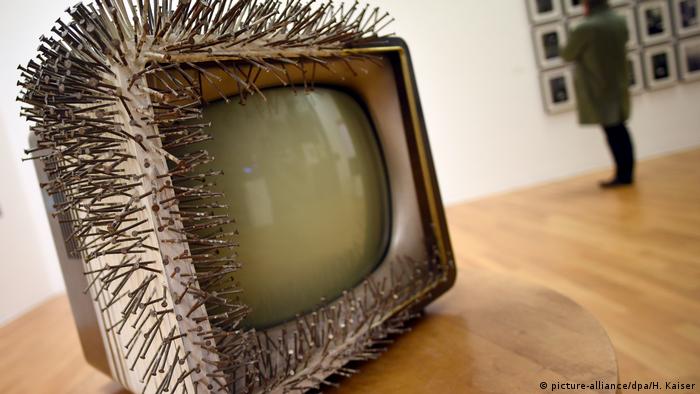 The avant-garde artists' group made waves far beyond Germany and their time. ZERO's ideas have undergone a renaissance in the new millennium, with ZERO retrospectives staged regularly worldwide since 2004. The Martin-Gropius-Bau in Berlin dedicated a big exhibition to ZERO in March 2015.

Back in 1966, no one could have anticipated the group's future popularity. It dissolved soon afterwards, and the artists went their separate ways.

Meanwhile, Günther Uecker's abstract art has been shown in over 60 countries and frequently been considered pioneering. In 2012 he became the first Western artist to be exhibited in the Iranian capital Tehran since the 1979 revolution. In 2007 came an exhibition in Beijing originally scheduled for 1994. On invitation from the Chinese government, Uecker had prepared the conceptual artwork Letter to Beijing. 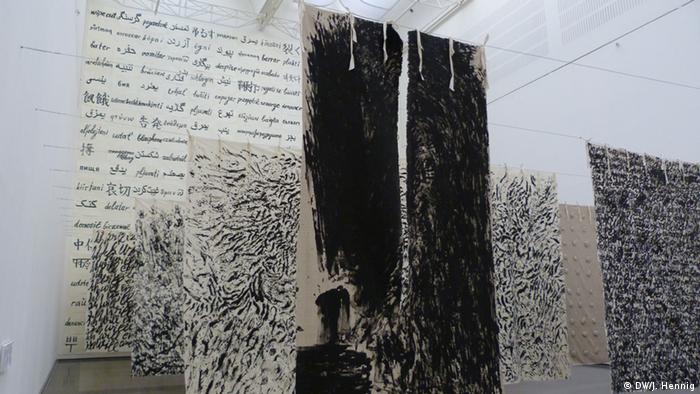 The UN Declaration of Human Rights, rendered artistically in 'Letter to Beijing'

The UN Declaration of Human Rights was proclaimed on 19 large, freely-arranged screens, but the words were partially rendered unrecognizable by black paint. On short notice, the Chinese culture ministry cancelled the show in 1994, explaining that the people were not yet ready for his art. Uecker was permitted to exhibit in China 18 years later.

Letter to Beijing isn't the only work in which Uecker has addressed human rights violations. In Verletzungsworte (Words That Hurt), on display in various cities of the world since 1993, 60 words like "hitting," "despising" and "gassing" that describe physical and psychological abuse are translated into local languages and painstakingly added by Uecker to the artwork.

Günther Uecker's art is understood — and esteemed — worldwide and in the most diverse cultures. Asked what makes it so universal, Uecker volunteers his own explanation: "I'm often told that the humane character recognizable in my work stirs peoples' feelings." 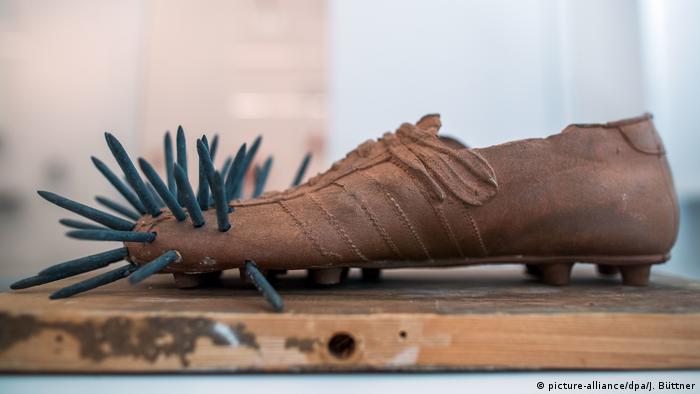 His universal art is understood worldwide, here as 'Spikes' (1972)

Re-encounter with an important piece

Uecker's brother-in-law and artistic colleague Yves Klein died of a heart attack at age 23 on June 6, 1962. After holding a vigil for the avant-garde French artist in Paris, he created a nail relief for that artist famous for his "Yves Klein blue" hue and his monochromatic works.

Uecker's homage is a white screen with a hint of red pigment and nails sparingly driven in. Unlike other reliefs, it is in lighter colors and has fewer nails, arranged in a cluster around the middle. 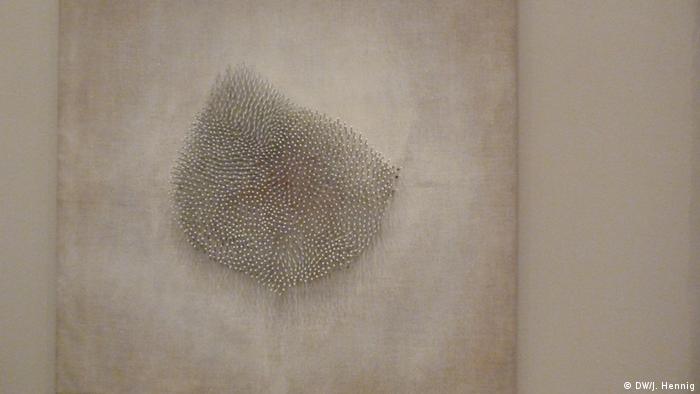 It was purchased by an anonymous collector, and it wasn't until 50 years later — when the big Uecker show was being mounted at the North Rhine-Westphalian (NRW) Art Collection in 2015 — that the artist saw it again. He was celebrating his 85th birthday, and the re-encounter seemed like a gift.

Proud that his creations have remained timeless and topical, Uecker said, "The pictures have moved far enough away from me that I can look at them with fresh eyes now, like a visitor to an exhibition."

Drilling deep into a multi-layered opus

Günther Uecker turns 90 on March 13, 2020. As an artist with a lasting impact on his times, he has been awarded Germany's National Cross of Honor and is proud to have written art history not only in his home country.

All his works and writings have been systematically documented in the "Günther Uecker Works Catalogue." The research project was long overdue: His own catalogue dated from the 1980s.

South Africa's leading contemporary art museum is about to show one of the country's most beloved artists, William Kentridge. Should race still matter when it comes to art? DW's Sertan Sanderson reports from Cape Town. (22.07.2019)

When it comes to art, it is still very much a man's world. To bring about some positive change, the Tate Britain has now decided to remove parts of its contemporary art by men and instead highlight works by women. (21.04.2019)