Günter Grass defends himself and his poem | Germany | News and in-depth reporting from Berlin and beyond | DW | 06.04.2012

Since the publication of his Israel-critical poem "What Must Be Said," Günter Grass has faced fierce criticism in Germany. The Nobel laureate has now defended himself in numerous interviews. 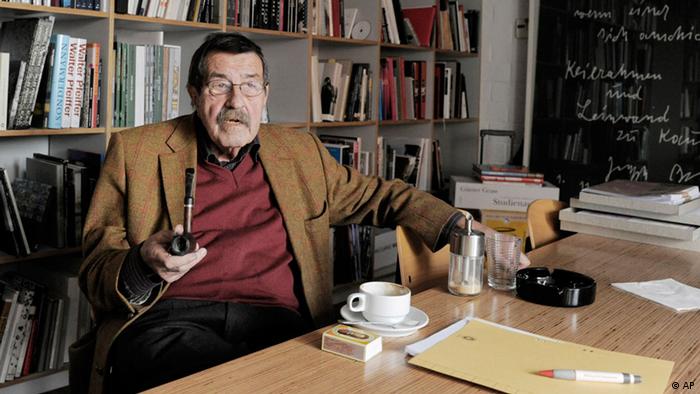 Günter Grass appears hurt by the massive condemnation of his poem. He said he feels that the German press has denounced him. Its position on Israel is monolithic and there is no objective debate, he said. He had predicted the knee-jerk accusations of anti-Semitism, the writer said told the public broadcaster NDR.

"Old clichés are applied. As expected, the term 'anti-Semitism' is put to immediate use," Grass said.

In his literary work he extensively confronted the German past, the 1999 Nobel Prize winner said in his own defense in an interview with radio station 3sat.

"In my books 'The Tin Drum'and 'Peeling the Onion' I bring the burden of my generation, the confrontation with the German responsibility for atrocities, forward to the present day," he said. "And that's why this accusation of anti-Semitism is hateful venom, without parallel." 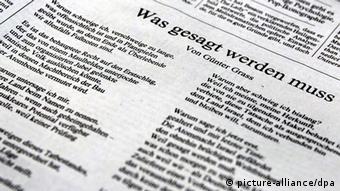 Grass said he made an error by referring to Israel generally in his poem, and not specifically the Israeli government. He added that he feels sympathy for the country, while expressing concern about its development. A preemptive strike against Iran could cause a nuclear disaster, even World War III, the 84-year-old said.

"This is not just a small military action. As if it a couple of missiles could be fired with only a few deaths, as Barak and Netanyahu claimed," Grass said. "This is a military action that will have consequences. The situation is getting worse. The danger is increasing that it will come to acts of war that will then further escalate." 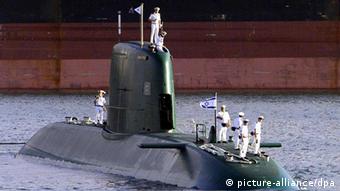 Germany is building submarines for the Israeli navy

Grass remained firm in his criticism of the German government. He said Berlin pays "dishonest reparations" by delivering and partly financing submarines to Israel. Three of these subs are already in operation and two more are to follow later this year. In March 2012 an agreement was reached to provide a sixth submarine, one-third of which will be paid for by Germany. These submarines can be equipped with conventional torpedoes, but also with nuclear warheads. Grass said that means Germany is "drawn into sharing responsibility."

"Cowardice before a friend"

Grass warned against unilateral Israeli action and the growing isolation of the country in diplomatic circles.

"Until now, after the experience of the Second World War, we tried hard - even with rogue states - to use diplomatic means," Grass said. "These attempts are currently also being made with the Israeli government. This high-handedness, to decide for themselves, no matter what others say, is a break with the hitherto successful tactic: As long as we are talking, we are not shooting."

Grass said he sees it as a duty to stand by Israel, even as a critic. Israel cannot be spared criticism; this would be "cowardice before a friend" - here the author employs a Cold War-era quotation from former Chancellor Willy Brandt.


Nobel laureate goes on the defensive

There has been no great uproar in Israel about the poem, Israeli journalist and historian Tom Segev said from Jerusalem. He personally said he finds the work "terribly vain" and "embarrassing."

Grass claims the topic is taboo, but in Israel there has been a heated discussion about the nuclear threat from Iran and Israel's nuclear potential for years. Meir Dagan, the former head of Mossad, the Israeli secret service, has warned the government against attacking Iran. The comparison between Israel and Iran twists around the facts, according to Segev.

"The fact is that Iran is threatening to destroy Israel - but Israel has never had the intention to destroy any country," he said.

Segev: Grass is not an anti-Semite 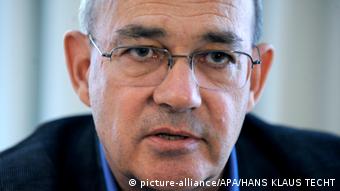 Tom Segev: The poem was "embarrassing"

Segev doesn't think Günter Grass is an anti-Semite or anti-Israeli.

"It is legitimate to criticize Israel, even in Germany," he said. "It is sometimes even necessary. With the oppression of the Palestinians, for example, criticism from outside is very important. In every country, human rights can really only be defended from the outside."

Ahead of his first meeting with new Israeli Prime Minister Naftali Bennett, the German president urged a political solution to the Palestinian conflict.