Görlitz: The resurrection of a tiny eastern German border town

Görlitz, a small city in Saxony, is well known for its unique architectural beauty. But this wasn't always the case. A new exhibition documents the city's dramatic transformation, and emergence as "Pensiopolis." 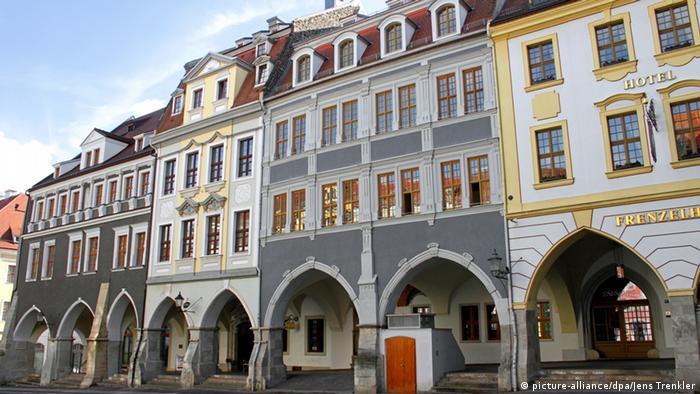 "The old city center looked miserable, with black patina and broken down houses. Most of them were empty," remembers the Dresden photographer Jörg Schöner.

Görlitz, a small city near the Polish and Czech borders, had the worst possible reputation in East Germany. Today, this is almost impossible to imagine. The cafés flaunting golden ornamentations at the historic market square are reminiscent of Italian villages. 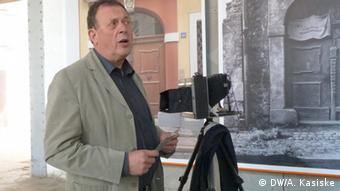 After being destroyed in a major fire during the fifth century, the historic Old Town was rebuilt based on Italian style. It boasts a unique composition of Gothic, Renaissance and Baroque buildings, with magnificent halls built for rich cloth merchants. The Wilhelminian and Art Nouveau districts neighboring the old city center survived both World War II and the communist era - which certainly wasn't a given.

That was incredible luck, according to Jörg Schöner, who specialized in architecture photography. He documented the reconstruction of Dresden's Church of Our Lady and presented photos of the "Green Vault" of the Dresden Castle at Expo 2010 in Shanghai.

He has known Görlitz for 40 years and has always been captivated by the beauty hidden behind the dilapidated facades.

Schöner's current exhibition, "Auferstehung eines Denkmals" (Resurrection of a Monument) is set in an abandoned factory. Two-by-three-meter color and black-and-white photographs hang from the ceiling of a huge hall.

Crumbling facades, broken windows, small rooms with wood or coal stoves: These shots document a period reduced to the basics and contrast dramatically with the current state of the buildings, which are now completely restored and turned into designer studios. 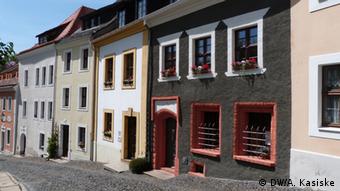 A darkened entrance with cracked windows is now a cheerful red and yellow passageway. In some cases, the photographer even subdued the hues, he says, "in order to tone down the excesses of the new colorfulness a bit."

The black-and-white pictures are from the early 1980s. A monument conservationist told him while he was still a student that he should document the city "before everything collapses." At the time, he didn't quite understand what he was photographing or why he was doing it.

"The people of Görlitz love their city, but those who were living in rundown houses without heating and warm water were dreaming of modern houses," says Schöner. He wasn't interested in morbid photography, he just wanted to show everyone how rich the city's substance was, he explains.

The preservation of historic buildings wasn't a priority in Görlitz, just like in the rest of East Germany. Social housing problems were to be solved with modern apartment blocks. Unlike many other German cities, however, practically no buildings were demolished, apart from some minor exceptions due to security reasons. Dedicated officials ensured this did not happen.

Lutz Penske was working on the conservation of historic monuments at the time. With a few colleagues, he collected over 21,000 signatures and headed off to Berlin. His plea: Görlitz should become a World Heritage site. 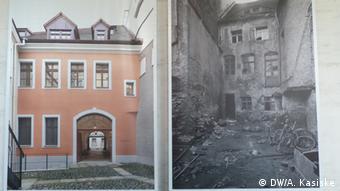 Görlitz then and now

Görlitz didn't make the list, but at least its historic center was left untouched. Penske also made sure whatever money was available would be invested in the restoration of the corner houses. "Our idea was that if we'd maintain the corner, the whole block would also stay up," he explained.

The strategy worked. When more and more houses were privately acquired from the East German state, there were several residents of Görlitz who restored their rundown houses to their historical luster.

Mitsching, who is now the monuments conservationist of Görlitz, was one of them. He repaired the ailing roof of his 400-year-old house using the tiles from another dilapidated house. "I can tell you the exact number of tiles on that roof, because I carried them up there myself," he says proudly.

Old buildings are in 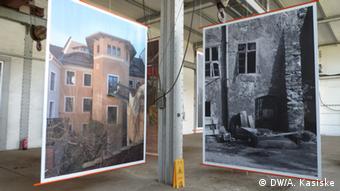 In the meantime, the old city center is now almost completely spruced up again, thanks to the help of an anonymous donor, amongst others. "We don't know who it is, but he or she seems to love the city. Every year we receive 500,000 euros which must exclusively be spent on restoration works," says Mitsching during a tour of the city. The old city has become a sought-after residential area.

And word has spread. More and more West German retirees are moving to Görlitz. The fantastic architecture, the short distances between the attractions and the modest rents have caused the city to become known as "Pensiopolis." But young people are coming too, and not just because of the technical college.

It's a miracle that the city looks this way just 25 years after reunification, says photographer Jörg Schöner. The millions of euros for the restoration of East Germany were well used in Görlitz. The exhibition "Auferstehung eines Denkmals" demonstrates this impressively well.

With over 4,000 houses, Tel Aviv has the world's largest number of buildings in Bauhaus style. Many of them urgently need to be renovated, and Germany has now committed to get involved. (15.05.2015)

Germany’s easternmost town is currently serving as a film set for the movie "Alone in Berlin". Long popular with filmmakers, Görlitz has earned itself the nickname "Görliwood". (06.05.2015)